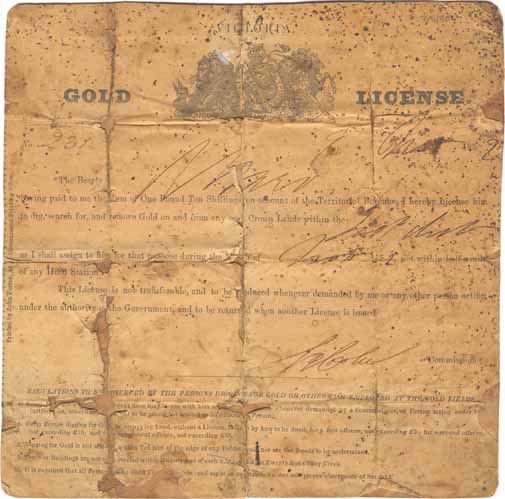 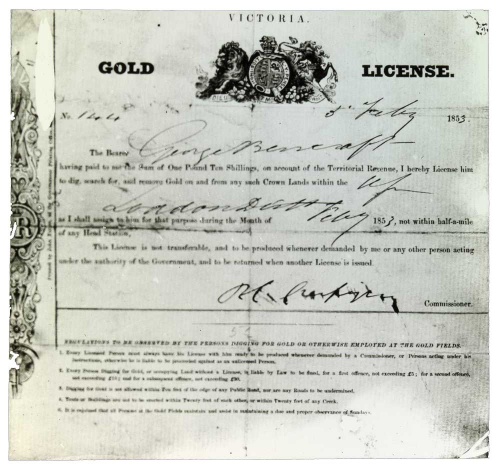 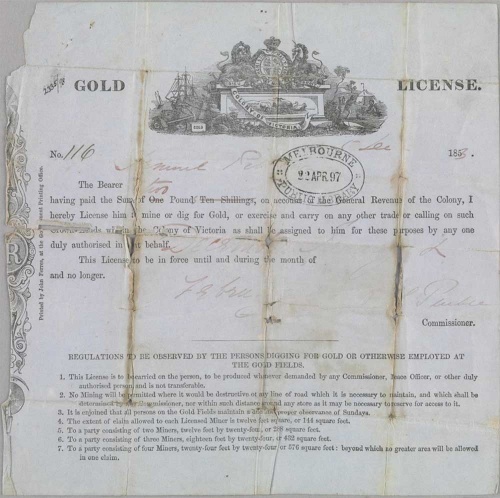 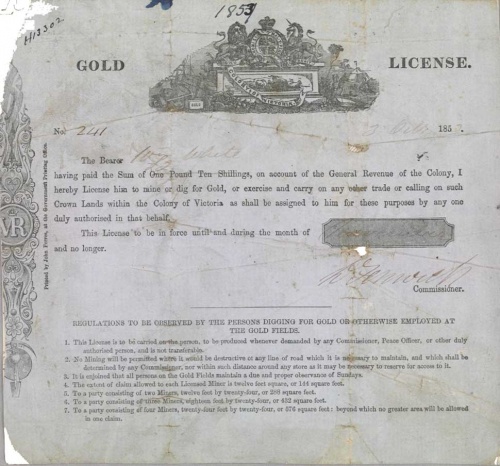 License no. 241. Issued to Ivy White, October 1853 and valid for the month of November. Issued by Commissioner Fenwick. State Library of Victoria Collection (H13302) 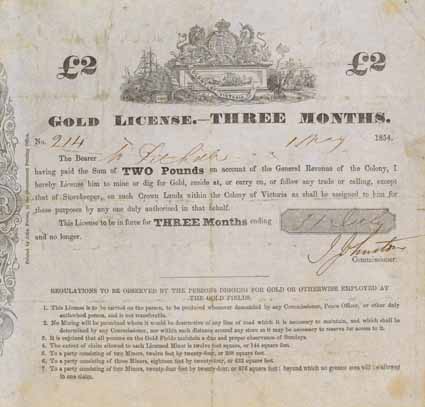 It was illegal to dig for gold without a current license.

Any adult male on the goldfields was required to hold a current license whether they were searching for gold or not.

Opposition to the proposal by Governor Charles La Trobe was voiced from the Argus in 1851 and this paper remained critical of, and was vocal against the licence system.[1]

Our readers will do well to recollect that a public meeting is convened for to-day at three o’clock, to take into consideration the lately promulgated regulations on the subject of gold discovery. These regulations, utterly absurd and mischievous as they are in the present position of mineral discovery in the colony, have been formally announced to come into force on Monday. On that day, the Government either places itself in the ridiculous position of having issued proclamations which amount to nothing, or through their staff of newly appointed Commissioners, they will have to drive off the poor diggers in a mob, and restore Anderson’s Creek, the Clunes diggings and the Buninyong country to their original seclusion.

As to any number of licences being taken out by men not averaging their expenses already, the thing is too preposterous for anything but a Victorian Government to expect. That gold exists throughout this Colony, possibly in profusion, there is little doubt. There is just as little doubt that the people, left alone, would find it.

It would appear to require some ingenuity of folly and impracticability, upon the part of the Government, to check the spirit of discovery, which might have placed our diggings on a level with those of Turon; but which once deadened again may leave our treasures unfound for half a century, and direct all our more energetic spirits in an exhausting stream towards Bathurst.

When the fine weather sets in, and men begin to move off in reality, our householders, farmers, settlers, and other employers of labour may, perhaps, learn another bitter lesson of the benign influences, which a faithless and incapable ruler is capable of shedding upon the people whose bread he eats, and whose interests he is sworn to foster.[2]

In 1852 the regulations printed onto the license were:

1. Every licensed person must always have his License with him ready to be produced whenever demanded by a Commissioner, or Person acting under instructions, otherwise he is liable to be proceeded against as an unlicensed person.
2. Every person digging to Gold, or occupying Land, without a License is liable by law to be fined, for a first offence, not exceedign five pounds; for a second offence not exceeding 15 pounds; and for subsequent offence, not exceeding 30 pounds.
3. Digging for Gold is not allowed within ten feet of the edge of any Public Road, nor are the roads to be undermined.
4. Tents or Buildings are not to be erected within twenty feet of each other, or within 20 feet of any Creek
5. It is enjoined that all persons on the Gold Fields maintain a due and proper observance of Sundays.

In 1854 the regulations on the license were:

Transcription from an 1854 Gold License (from near Bealiba)

Having paid the sum of ONE Pound on account of the General Revenue of the Colony, I hereby License him to mine or dig for Gold, reside at, or carry on, or follow any trade or calling, except that of Storekeeper, on such Crown Lands within the Colony of Victoria as shall be assigned to him for these purposes by any one duly authorised in that behalf.

This License to be in force for ONE Month ending Sepr. and no longer. XXXX Commissioner.

REGULATIONS TO BE OBSERVED BY THE PERSONS DIGGING FOR GOLD OR OTHERWISE EMPLOYED AT THE GOLDFIELDS,

1 This License is to be carried on the person, to be produced whenever demanded by any commissioner, peace officer, or other duly authorised person, and is not transferable.

2 No Mining will be permitted where it would be destructive of any line of road which it is necessary to maintain, and which shall be determined by any Commissioner, nor within such distance around any store as it may be necessary to reserve for access to it.

4 The extent of claim allowed to each Licensed miner is twelve feet square, or 144 square feet.

5 To a party consisting of two Miners, twelve feet by twenty-four, or 288 square feet.

6 To a party consisting of three Miners, twenty-four feet by twenty-four, or 576 square feet: beyond which no greater area will be allowed in one claim.

Printed by John Ferres, at the Government Printing Office. [3]

A Victorian Gold License cost 30 shillings per month (or one pound ten shillings for two months). In 1854 it was possible to purchase a gold license for a three month period for two pounds. 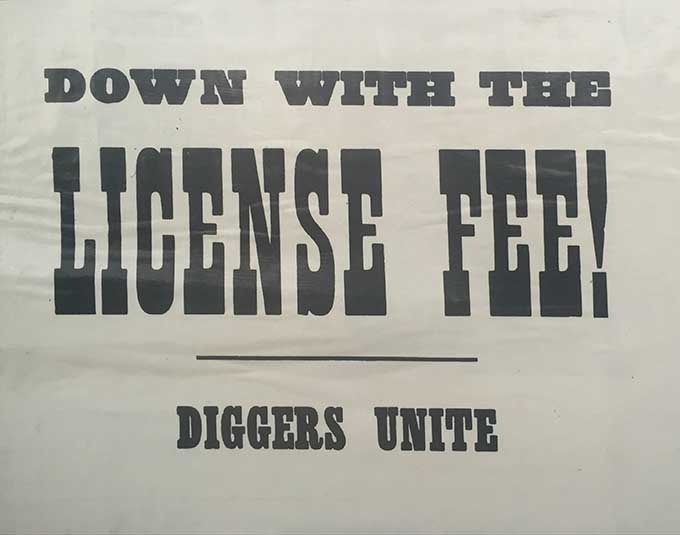 Gold Fields Commissioner reports in favour of gold fields reform. The Gold License was abolished, Local Courts to be elected by miners and 'miners right' of 1 pound a year which conferred electoral rights.[4] The Miner's Right gave miners the right to mine gold and entitled its bearer to a vote in parliamentary elections.[5]