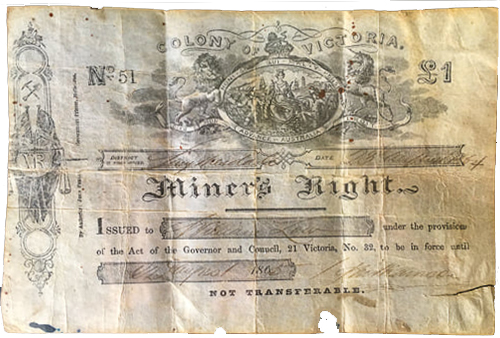 Miner's Right made out to William Law on 23 August 1864 at Smythesdale. The miner's right was valid for 12 months. Courtesy of Rod Beveridge, 2019 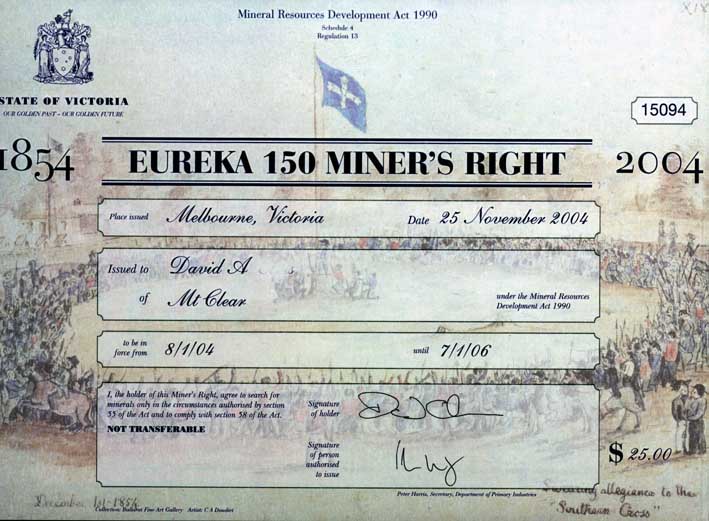 The Miner's Right replaced the Gold License on 01 May 1855 and cost one pound per annum. A digger holding a Miner's Right could dig for gold, and had the right to take a parcel of land and erect a cottage on it with garden. It also gave the right to graze animals on a Goldfield Commons, and on vacant Crown Land.

The first Miner's Right was issued in late June 1855, and in July the first Local Courts were elected by miner's right holders. By the end of July 1855 30,000 Miner's Rights had been issued, and 50,000 had been issued by the end of the year. The fourth Goldfields Act, passed in early 1858, gave increased privileges to holders of Miner's Rights. These included the right to make residential claims, allowing the cutting of timber on claims and giving the right to build races and dams on any crown lands for mining purposes. The Local Courts were replaced by a combination of a Court of Mines and elected Mining Boards.[1]

Any person may obtain a Miner's Right upon payment of the sum of Two shillings and sixpence at the receipt and Pay Office, treasury, Melbourne, at any Clerk's of Court's office, or from any other issuer of Miner's rights. Such rights shall remain in force for one year.[3]

The holder of a Miner's Right is entitled to take possession for gold-mining purposed of such areas of Crown lands as the By-laws permit. He is also entitled, subject to such By-laws, to cut, construct and use races, dams , and reservoirs for mining purposes through and upon any Crown lands, and to take or divert waster from any spring, lake, pool or stream situate or flowing through or adjoining Crown lands, and to use such water for mining for gold, and for his domestic use. Also to cut any live or dead timber, except blackwood, and to remove the same, subject to Section VII of the Forest Acts 1928, and to remove any stone or gravel for mining purposes, and for building for himself any place of residence or of business, or of fuel or otherwise for his personal use, from any Crown lands not exempted from occupation for mining.[4]

Every holder of a Miner's Right shall, during the continuance thereof, be entitled to occupy on any gold-field, for the purpose of residence, so much of the Crown lands (not otherwise excepted) as proscribed by the By-laws, and to put up and at any time remove any building or other erection.[5]

Miner's Rights During the Great Depression

In the 1930s Depression, Miner's Rights were given out to the unemployed, along with supplies and a prospector's guide.[6]

In the 1960s most miner's residential areas were converted to freehold. The classes of lands upon which prospecting under a Miner's Right were permitted were gradually restricted and in 1975 holders of the Miner's Right were required to obtain consent before they could obtain the legal right to mine a deposit.[7]