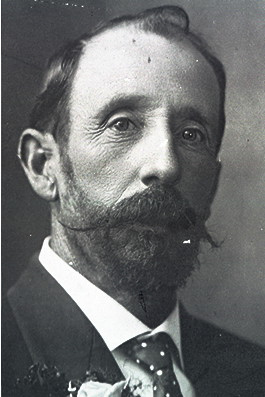 Born at St lves, Cornwall, in 1845, Charles Curnow Phillips was aged four years when his parents (see Sarah Phillips) arrived at Geelong. From there they travelled by dray to Ballarat, where his father became a digger. Charlie Phillips was at the first service at Mount Pleasant Church. At the Anniversary it was noted that 'At least one worshipper at the first service is still living, in the person of Mr. C. C. Phillips, of Rocklyn.'

In the very early days of Ballarat Methodism services were held at a locality then known as Clayton's Hill in the vicinity of the present Lal Lal Street, in an edifice constructed of slab walls and a canvas roof. Early in the year 1855 the opening of the Gravel Pits diggings (near the site of our Barkly Street Church caused a move of population from Clayton Hill. A number of Cornishmen, transferring from that locality to Mount Pleasant, had their church building brought across and re-erected on the site of the present Mount Pleasant Church. The first services at Mount Pleasant were held in this structure, which had seating accommodation for about one hundred worshippers, in April, 1855. At least one worshipper at the first service is still living, in the person of Mr. C. C. Phillips, of Rocklyn.[1]

As a child of 9 years Charles Curnow Phillips was an eyewitness to the events of the Eureka Stockade.[2]

Mr. Phillips joined the education service, and was head teacher at Rocky Lead for 34 years until his retirement.[3] Charles is also referenced in Cornish Pioneers of Ballarat and the Spielvogel Papers volume 1.

C. C. PHILLIPS J.P. OF ROCKY LEAD
I arrived in this state (which was then Port Phillip) on 11th July 1849. In May 1850 by an English Act of Parliament Port Phillip was separated from New South Wales and was named Victoria. News of the Act of Separation reached here in November 1850 and I well remember the celebrations that took place in Geelong where my parents then resided.
The outstanding feature to my boyish idea was the congregation of black fellows who were gathered from the tribes in country surrounding Geelong. A new blanket was presented to each adult and a bullock was roasted for their alleged dinner. I well remember the carving of the partially roasted oxen. At night there was a grand corroboree in what was then the Market Square and from 600 to 700 aborigines took part in the weird proceedings.
I remember Black Thursday in February 1851. In October 1851 my father shouldered his swag and walked to Ballarat diggings and made good. In August 1852 my family proceeded to Ballarat. No furniture van was required to convey our belongings. A small dray with a ? or canvas covering and one of the best horses that could be bought were our means of conveyance. There was no macadamised road after leaving Bates Ford across the Moorabool near Geelong and when we got to what are now Meredith and Elaine the ground became “spewey” and when the wheel broke through the surface only the body of the dray stopped a total disappearance. We then had to wait till someone with sufficient horse power came along to give us a “pull out”.
The journey took us eight days to finish. Our beds for seven nights were not spring mattresses but in my case and my father’s, the cold cold ground as we politely gave to mother and the two little ones the comfort of a bed on top of our scanty belongings in the dray.
We arrived in Ballarat on 20th August 1852 and camped in and 8x6 ft tent on Clayton’s Hill named after David Clayton an American who after working at his trade as a cooper making tubs, cradles &c for the diggers for some time returned to his native land.
In February 1854 we shifted to Creswick where we remained for nine months. Fortune did not smile on us and we returned to Ballarat in October of that year when Ballarat was strongly agitated over the license business and we camped at Mt Pleasant.
I remember the meeting on Bakery Hill now Victoria St when the late J.B. Humffray addressed a meeting of diggers just at the top of the hill about opposite to where the present Mack’s Hotel now stands and at the close of the meeting the licenses were burnt. I was shepherding holes on the Eureka Lead when Scobie was killed outside Bentley’s Hotel. I saw that hotel burnt down and the escape of Bentley. I saw the stockade and on the memorable Sunday morning 3rd Dec 1854 was aroused shortly after daylight by the commotion caused in our camp by the sounds of firearms. After the firing ceased, though forbidden to do so, I followed my father and his mates to the scene of action where we saw some of the dead who had not been removed at that time.
The Mayor in his circular stipulated one or two reminiscences so I must stop though I could go on and on with incidents on Old Ballarat during the early gold era.[4]

EUREKA STOCKADE WITNESS - The death has occurred of Mr. Charles Curnow Phillips, aged 92 years, of Rocky Lead (V.) , who claimed to have been the last surviving witness of the Eureka Stockade. Mr. Phillips, when aged nine years, was living with his parents at Eureka Hill when he heard the first shots fired December 3 1854. Disregarding his parents instructions, he rushed to the scene, and arrived in time to see the troopers renewing their attack which captured the stockade, and to watch the removal of the dead. Born at St. lves, Cornwall, in 1845, he was aged four years when his parents arrived at Geelong. From there they travelled by dray to Ballarat, where his father became a digger. Mr. Phillips joined the education service, and was head teacher Rocky Lead for 34 years until his retirement.[5]

Eureka Pageant, 1917
Mr. C. Phillips, a retired school teacher, mentioned that his physical appearance threw discredit on his assertion that he arrived in Victoria in 1849, in Ballarat in 1851, and was working as a boy on the Eureka in 1854. He is now 72 years of of age. [6]

EUREKA ANNIVERSARY. The eighty-second anniversary of the Eureka Stockade battle was celebrated at the Stockade Reserve, in Ballarat, on Sunday. There was a large attendance, including the Mayor (Cr. J. Pryor), members of Parliament, and Mr. C.C. Phillips, who has personal recollections of Eureka. [7]