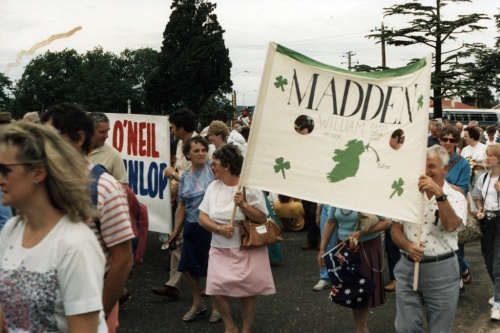 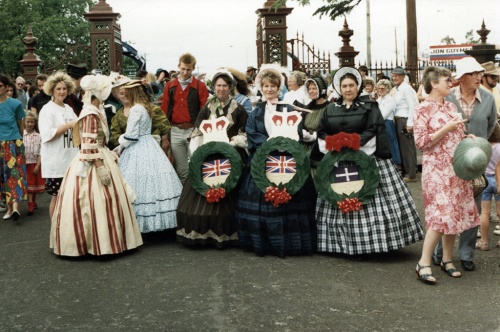 William Madden was inside the Eureka Stockade on 03 December 1854. He was standing beside his mates Patrick Gittings and John Hynes when the fell. Madden fled taking his firearm with him. A trooper pursued him into the bush outside the stockade demanding his surrender. Madden refused and aimed his firearm. The trooper rode away.[1]Geelong Advertiser, 07 December 1904.</ref>

THE EUREKA STOCKADE,
INTERESTING REMINISCENCES.
Mr. W. G. Madden writes as under:
As the Eureka Stockade Jubilee is now attracting a good deal of attention, I would draw your attention to the fact that Geelong is represented at the celebrations in Ballarat by Mr. Henry James, aged 78, of Geelong, an old Stockader. He found things a "bit slow" at the sports there on Saturday, and created some diversion by singing "The Death of Nelson." My father, Mr. John Madden, of the Geelong railway, is also in Ballarat at present, being granted a free pass by the Government. His father, Wm. Madden, arrived in Victoria in the ship Mangertun in 1852, and was living with his family at the Black Hills, near Ballarat; for about two years previous to the riot. He and his two mates. Patsy Gettings and John Hines (both of whom were, afterwards killed by his side during the fight) had two rich claims on the Eureka Lead. On the Saturday night they went into the Stockade, and next morning (Sunday), they were attack ed, the soldiers attacking in the front, and the mounted police at the rear. Wm. Mad den cut his way out through the ranks of the police, and escaped to the bush, where a trooper followed, and with drawn sword called upon him to surrender. He said, "No, I won't surrender; get you away to the right, or left before I fire," with that bringing his gun to his shoulder. The trooper wheeled round and galloped of.
We have our grandfather's gun now. On reaching his house he told his sons, John and James, of what had occurred, and they went and inspected the Stockade, and saw the blacksmith, who made the pikes, and a Portuguese, who used to sell sherbet, etc., lying dead. Mr. Madden senr's shipmate, Luke Sheehan, was wounded, and was afterwards sentenced to be shot. Mr. John Madden re members seeing the stone thrown by Mr. Gullan, and the burning of the hotel. He took a ball away from the skittle alley, but had it taken away from him by a man to throw at some one. He is now living a good time in Ballarat, where he has met several shipmates whom he had not seen for nigh 50 years./ref>Geelong Advertiser, 07 December 1904.</ref>