Hynes was from County Clare, Ireland[1], the son of John and Judith Hynes.[2] He arrived in Australia with 3 young children, Michael (11 years), Margaret (8 years), and Honora (4 years). His wife died during the voyage. Hynes' child was baptised at St Alipius on 19 August 1854. [3]

Hynes died of gunshot wound during the battle of the Eureka Stockade, and was buried at the Ballaarat Old Cemetery on 3 December 1854. ***His names has been incorrectly spelt “Haynes’ on the Eureka Monument.[4] Editor of The Times Samuel Irwin was the official death informant. 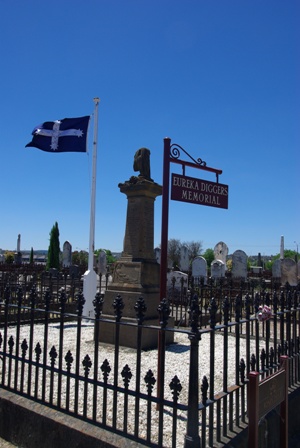 A Birthplace of Freedom.
The Government officials at first completely lost; their heads in face of the difficulty of dealing with the thousands who were drawn to the goldfield. £3 was charged at length for a license to dig, and so brutal was the inquisition to which people on the field were subjected that a crisis was inevitable. Other phases of stupid tyranny, such as not allowing a digger to cultivate a vegetable patch on his ground, &c, were not wanting to intensify the feeling of dissatisfaction. At length, when respectful representations to Governor Sir Charles Hotham (a retired naval officer) had been repulsed in true quarter-deck style, an indignation meeting was held, under the presidency of a genial and popular Irishman — Mr. Timothy Hayes — at which 12,000 diggers con signed their licenses to the flames of a bonfire as a protest against the intolerable tyranny of Officialdom. Four of the principal speakers at the meeting were Messrs. Lalor, Quinn, Murnane, and Brady. Next day an unexpected 'digger hunt' — the last — was made under a military display. The diggers, unprepared for, and not desiring, active hostilities, were driven to their camp, from which a number of men were removed as prisoners. The result of that day's work was open war between the gold-fields' population and the Crown, No sooner had the police and the military returned with a number of prisoners to the Government Camp, than the diggers assembled en masse on their old meeting-ground, Bakery Hill, ap pointed a council of war, and elected Peter Lalor (son of the late member for the Queen's County, and brother of the present member) as their commander-in-chief. A declaration of independence based on the American model was drawn up and signed, and a new silken flag — the Southern Cross — five silver stars forming- a cross on a blue ground — was unfurled to the breeze. Beneath this diggers' standard, Lalor, as commander-in-chief, took his stand and administered the following oath to his men : 'We swear by the Southern Cross to stand truly by each other and fight to defend our rights and liberties.' It was in that portion of the goldfields known as the Eureka, and principally inhabited by Irish diggers, that the fortified camp of the 'rebels' as they were now officially described, was erected. It consisted of an entrenched stockade, that was capable of being made a place of great strength if the diggers had had time to utilize its natural advantages, and place it in a proper state of defence. It occupied an area of about an acre, rudely enclosed with strong slabs. Within the stockade drilling now became the main business of the hour; the diggers council of war sat almost continuously ; blacksmith were kept at work night and day forging pikes. 'Let those who cannot provide themselves with firearms procure a piece of steel five or six inches long, attached to a pole, and that will pierce the tyrants' hearts,' were the words of the commander-in-chief to his men. Patrick Curtain was the chosen captain of the pikemen, and and Michael Hanrahan was their lieutenant. Early on the morning of Sunday, December 3rd, 1854, the assault was made by the combined forces oi the military and the police under the command of Colonel Thomas, of the 40th regiment. The insurgent diggers, commanded by Mr. Peter Lalor, made a brave and desperate resistance; the pikeman (an almost exclusively Irish detachment) stood their ground in double file around the enclosure and repelled several charges of cavalry ; volley after volley was poured into the stockade and answered by the diggers, until their want of ammunition and comparative unpreparedness became apparent. After half an hour's desperate hand-to-hand fighting, the Eureka stockade was surrounded and carried by storm. Subjoined are some of the names of the Irish men who fell [[or were wounded in this first struggle for freedom on Victorian soil : Killed. — John Hynes, County Clare, Patrick Gittings]], Clare ; Thomas O'Neil, Kilkenny ; George Patrick Mullens, Kilkenny; John Diamond, Donaghy, Donegal; Edward Quinn, William Quinlan, Cavan. Mortally Wounded. — Thaddeus Moore, County Clare ; James Brown, Edward McGlynn, Wexford. Wounded and Subsequently Recovered.— Peter Lalor, Queen's County; Patrick Hanofin, County Kerry ; Michael Hanly, Tipperary ; Michael O'Neil, Thomas Callanan, Patrick Callanan, Clare; James Warner, Cork; Luke Sheehan, Michael Morrison, Galway; Denis Dynon, Clare.[5]

The Men Who Fell at Eureka.
The list of killed and wounded at Eureka has never been complete, for many who escaped wounded died afterwards, ana some of the dead were taken away by their friends. The diggers' casualties as prepared by Peter Lalor, were as follows, from which it will be be seen that the majority who fell were Irishmen:— Killed — John Hynes and John Diamond, of County Clare; Patrick Gittens, Thomas O'Neil, and — Mullins, of County Kilkenny; Samuel Green, England; John Robertson, Scotland; Edward Thoneman, Prussia; John Hafele, Wurtemburg, Germany; George Donaghy, County Donegal; Edward Quin, County Cavan; Thomas Quinlan, Goulburn, N.S.W.; a digger on Eureka known as "Happy Jack;" and two others whose names were unknown. Died of their wounds — Lieutenant Ross, Canada; William Clifton, Somersetshire; Thaddeus Moore, County Clare; James Brown, Newry, Ireland; Robert Julien, Nova Scotia; Edward McGlyn, Ireland; two men whose surnames were Crowe and Fenton; and another quite unknown. Twelve men who were wounded are known to have recovered. Of the attacking force, three privates were killed in the assault, and Captain Wise and another private died of their, wounds.[6]