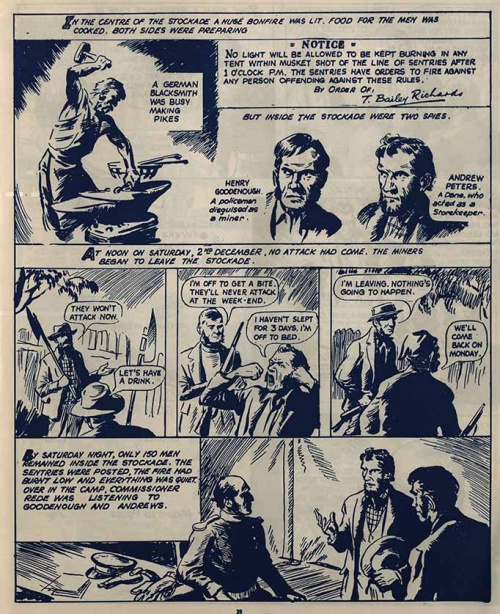 John Hafele was from Wurtenberg, Germany. He was a digger and blacksmith who was killed during the Eureka Stockade battle. ].[1]

Hafele was killed during the Eureka battle. It is said that the top of Hafele’s skull was taken off by Lieutenant Richard’s sabre. Hafele is listed on Peter Lalor’s list of casualties only.[2]

EUREKA STOCKADE. TO THE EDITOR OF THE ARGUS.
Sir, – Mr. ex-Police-Superintendent Sadleir's letter on this subject in "The Argus" of last Saturday was good in tone. But it did not at all bear down Mr. Percy de Jersey Grut's strong contention, namely, that for over 50 years past, the "Eureka Stockade" affair has been unwarrantly exploited on the entirely erroneous, it not quite absurd, supposition that the armed (and really heroic) resistance then offered to a "quarter-deck" and oppressive Government," was all done on the part of Ballarat as a whole, the credit thereof belonging to the Ballarat people as a whole. The reality was something very different.
When I had trudged up to Ballarat in the early winter following the "unpleasantness" of December 3, 1854, I soon discovered that the sympathy with the "rioters" previously displayed in Melbourne was at least a thousand- fold more than had ever been felt in Ballarat itself. J.B. Humffray was then the local hero, for he had consistently urged the adoption of moral force and constitutional means as the true method, and his following was very large. And when, in July 1855, Mr. Commissioner Daly, on horseback, told the dense crowd of "diggers" assembled in the Main-road what the new mining regime would be, the cry I heard all round was that, but for the stockade, the welcome remedy would have come ever so much sooner. That was the strong feeling of the time, so far as I could make out.
It has always been thought that there was some mystery as to the real origin of the movement which actually started the stockade. There had been plenty of pub-lic meetings and "stump" speaking, but no talk thereat of arms. Of course, the wilder and more secret proposals attracted a few British enthusiasts, but the predominant partner in the business is clearly shown by the following passage from the book subsequently written and published by Carboni Raffaello, an educated but very fiery ltalian, who was one of the prisoners tried for "high treason" in Melbourne in April, 1855, and promptly acquitted. The statement now quoted is set out in my own autographed copy of that work, and it also appears in the "History of Ballarat" by my old comrade, W. B. Withers.
"Requiescat in Pace. – Lalor's Report of the Killed and Wounded at the Eureka Massacre on the morning of the memorable third of December 1854:—The following lists are as complete as I can make them. The numbers are well known, but there is a want of names. ... Killed—1, John Hynes, County Clare, Ireland; 2, Patrick Gittins, Kilkenny, Ireland ; 3, — Mullins, Kilkenny, Limerick, Ireland; 4, Samuel Green, England; 5, John Robertson, Scotland; 6, Edward Thonen (lemonade man) Elbertfeldt, Prussia ; 7, John Hafele, Wurtemberg; 8, John Diamond, County Clare, Ireland; 9, Thomas O'Neil, Kilkenny, Ireland ; 10, George Donaghy, Muff, County Donegal, Ireland; 11, Edward Quin, County Cavan, Ireland; 12, William Quinlan, Goulburn, N.S.W. ; 13 and 14, names unknown, one was usually known on Eureka as "Happy Jack." Wounded and Since Dead, —1, Lieutenant Ross, Canada; 2, Thaddeus Moore, County Clare, Ireland; 3, James Brown, Newry, Ireland ; 4, Robert Julien, Nova Scotia ; 5, — Crowe, unknown ; 6, — Fenton, unknown; 7, Edward McGlyn, Ireland; 8, No particulars. Wounded and Since Recovered—1, Peter Lalor, Queen's County, Ireland; 2, name unknown, England; 3, Patrick Hanafin, County Kerry, Ireland ; 4, Michael Hanly, County Tipperary, Ireland; 5, Michael O'Neil, County Clare, Ireland; 6, Thomas Callanan, County Clare, lreland ; 7, Patrick Cullanan, County Clare, Ireland ; 8, Frank Symmons, England ; 9, James Warner, County Cork, Ireland ; 10, Luke Sheehan, County Galway, Ireland; 11, Michael Morrison, County Galway, Ireland ; 12, Dennis Dynan, County Clare, Ireland.
"(Signed) PETER LALOR, Commander-in-Chief."
And here light comes in to those who can see it. A mere glance at the above will convey everything needful. In this connection it may be borne in mind that less than six years before was seen the ignominious conclusion (in the infamous cottage garden) of the Smith O'Brien "insurrection" episode of 1848, and that the memory thereof still rankled like poison in a number of Hibernian minds.
Yours, &c.,
D. DICKENSON WHEELER.[3]