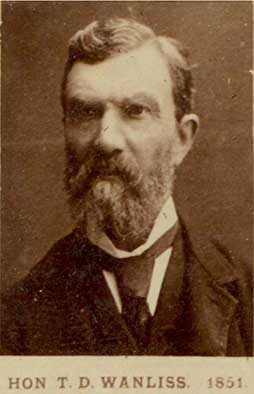 Thomas Wanliss sailed to Australia on the Castle Eden.[1] He was associated ith the Star newspaper.

Ballarat 23rd Oct 1854
To His Excellency
Sir Charles Hotham K.C.B.
Lieutenant Governer of the Colony of Victoria
We the Committee for the prosecution of the inverstigation into the death of the late James Scobie, duly appointed at the public meeting held here on the 17th inst do beg to forward to Your Excellency the enclosed petition.
Your Excellency having anticipated the object of the petition, we, desiring as much as possibly to allay the excitment at present insisting on these diggings have thought it unneccessary and impolitic to have signatures attached to the Petition.
We beg to tender our sincere thanks to Your Excellency for the promptitude and vigour with which the case has been taken up by Your Excellency's Government, and which is rapidly restoring the confidence of the community in that due administration of the law, whih is necessary to the preservation of society.
In any investigation which Your Excellency may be pleased to institute into the matter, may be pleased, and especially that of the Coronoer, will appear to Your Excellency in its true light.
We beg to subscribe ourselves Your Excellency's most devoted and obedient servants.
James Russell Thompson Chairman
Peter Lalor Secretary
Thomas D. Wanliss
John Weightman Gray
William Corkhill
Alexr M. P. Grant
Archibald Carmichael[2]

Thomas Drummond Wanlass was a member of the Jury at the Inquest into the death of William Hardie on 04 December 1854.[3]

Regret was expressed in Ballarat on Fri day at the announcement in "The Age" of the death in Scotland of Mr. Thomas Drummond Wanliss, a journalist, who was associated with the Ballarat press in the early gold digging days. He was an eye witness of many of the occurrences that led to the revolt at the Eureka stockade, including the burning of Bentley's Hotel on the field by the aggrieved diggers. Lady Irvine, the wife of the Chief Justice and Lieutenant-Governor, is a daughter of Mr. Wanliss.[4]

DEATH OF AN OLD RESIDENT OF BALLARAT, May 20.
Mr J. Russell Thomson died at his residence, Ballarat West, to night, of liver complaint. He was 64 years old Mr Thomson was always greatly liked and esteemed here, his courteous bearing and his integrity commanding for him the respect of all who knew him. He will be remembered by old residents as a member of the firm of Thomson, Walsh and Moore, sharebrokers. He was in Ballarat before the Eureka Affair, and was in the police court when Bentley was charged with the murder of the digger James Scobie, and acquitted by the magistrate Mr Dewes. On that occasion Mr Thompson narrowly escaped committal for daring to urge that Bentley's was a case which should be sent to a jury; but his expression of opinion was popular. At an indignation meeting close to where Scobie was killed, 'Mr.Thomson, with Messrs T.D. Wanliss, P. Lalor, J.W. Gray, W. Corkhill, A.McP. Grant, and Archd. Carmichael were appointed to collect money to defray the cost of a further prosecution of Bentley. In the early days here Mr Thomson amassed a fortune, and has of late lived retired, He still supported mining, but latterly with little success. He has, no relatives in the colony. [5]

Monument to the Eureka Victims.— A meeting of the friends and members of the committee for the purposo of raising funds to erect the monument so gene rously presented by Mr Legget, was held in the Eureka Hotel last evening. Patrick Curtain was called to the chair, find briefly stated the purpose of the meeting. Mr Donovan said that Mr Leggat had kindly offered to place at the disposal of the committee a very handsome monument, on condition of their paying tho expense of carriage from Geelong, and of erecting it at the grave yard. Mr Fahey moved, and Mr Harrington seconded, " That the secretary be instructed to write to Mr Leggat, and thank him for his Handsome offer of a monument to the victims of the Eureka massacre; and, in acccpting it, to express to him the high sense entertained by the committee of his liberal and patriotic gift.' Car ried. It was resolved, " That a public meeting for the purpose of erecting a monument to the Eureka victims be held on Saturday next, at four o'clock, on the site of the Eureka Stockade.' ' That a public meeting be held at Frenchman's Lead, near the All Nations Hotel, for the same purpose, on Saturday next, at four o'clock. 'That subscription lists be printed, for the purpose of collecting money to defray the necessary expenses con nected with the objects of the foregoing resolutions." 'That Mr James Oddie be appointed treasurer of the committee. " And " That Messrs Sam Irwin, J.P., T. D. Wanliss, and W. D. C. Denovan, be appointed a sub-committee to draw up a suitable inscription for the monument, and also to communicate on the subject with Peter Lalor, Esq., M.L.C." After a vote of thanks to the Chairman, the meeting separated. — Star.[6]

EUREKA STOCKADE MEMORIAL.
A meeting of the executive committee was held on Tuesday evening; Mr R. Lewis in the chair. Present,— Messrs Ferguson, Bechervaise, Josephs, Williams, Roff, Spain, Morrison, Hall, Dyte, and Wilson. Donations were received from the following mining companies: Royal Saxon, Maxwell’s, New, Britannia, Kong Meng, and Imperial; also; Australian Natives' Association, Ballarat, Creswick, and Stawell branches; Buninyong Miners' Association, St. John's Church Improvement Society, Tinsmiths’ Society,: Typographical Society; from Messrs Wanliss, Wilson, Serjeant, McGovern, M’Donald, Salter, Oddie, Russell, Glenn, Lieutenant-Colonel Smith, Hickman, Ferguson, Hill, Fincham, and others. Poetic contributions from J. W. Mills and William Walker, of Ballarat; and William Rankin, of Craigie, were received with thanks. Seven designs for the memorial were submitted; those marked “Piper," King," and “Pioneer" were highly approved of, and ultimately the design of Mr H. A. King, of Ballarat East, was accepted. It was decided that specifications be prepared, with the view; of calling for tenders forthwith. The committee meet on the ground, in company with the Town Council on Friday, 25th-instant, for the purpose of selecting the site, as there appears a conflict of evidence as to the actual position of the Stockade.[7]