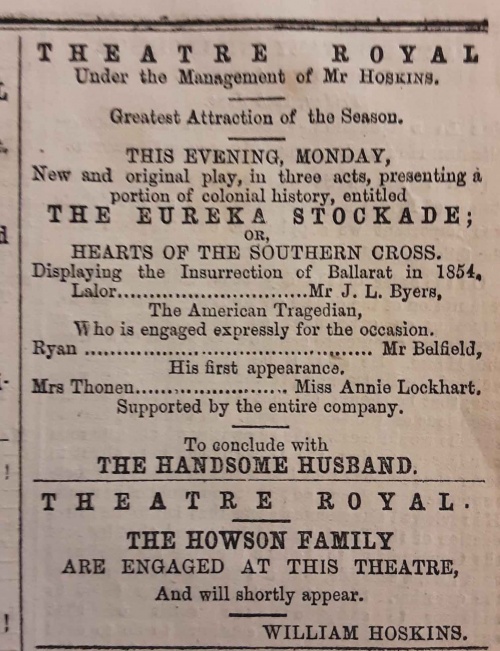 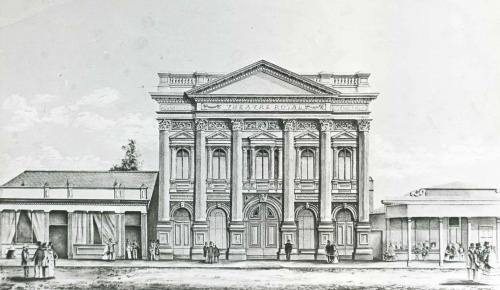 Theatre Royal, Sturt St. Ballarat, was designed by BACKHOUSE & REYNOLDS, " ... and has a tolerably effective classical elevation with a bold corinthian portico. It is at present the handsomest theatrical elevation in Victoria ..." [1]

The Battle of the Eureka, according to Mr Belfield, was fought over at the Theatre Royal on Monday night. This version of the burden of Carboni Raffaello’s quaint book, and of an event which once really thrilled the nerves of the people of Ballarat, is not unlike what Bishop Colenso says the Pentateuch is – partially un-historical. Mr Belfield has, in fact, taken a slightly poetical, not to say comic, license with facts. Besides that, it is rather a dangerous step, on the very spot, to put highly tragic blank verse into the mouths of men who were not noted for that sort of thing, and to make Ballarat diggers of the Stockade epoch spout like heroes in stilted dramatic declamation, is here rather suggestive of burlesque. The most lively imagination cannot, in Ballarat at least, listen to this version of the Stockade story without a sense of the ludicrous; but, away from the spot, Mr Belfield’s drama may be more successful, for there is in it some very fair writing, and there is not a little ingenuity in the arrangement of the “situations.” We do not wonder that some of the players found it hard work to get through the business and keep their countenances obedient to stage proprieties, for it was natural that they should feel the extremely hazardous nature of their enterprise; and if the dignified chairman of committees in the Assembly should chance to see himself impersonated by Mr Ryan and listen to the sonorous heroics which the author attributes to him, we presume he will be disposed to offer Mr Belfield a handsome sum for his copyright. We have not space to deal with the performance in detail, and this is the less necessary as the play is to be repeated. The scenery is very fairly got up, and the representation of the Stockade is more true to fact than most stage pictures are. At the conclusion of the play Mr Hoskins was called for but he did not present himself. The drama will be repeated this evening, followed by a good afterpiece.[2]
Retrieved from "http://www.eurekapedia.org/index.php?title=Theatre_Royal&oldid=23483"