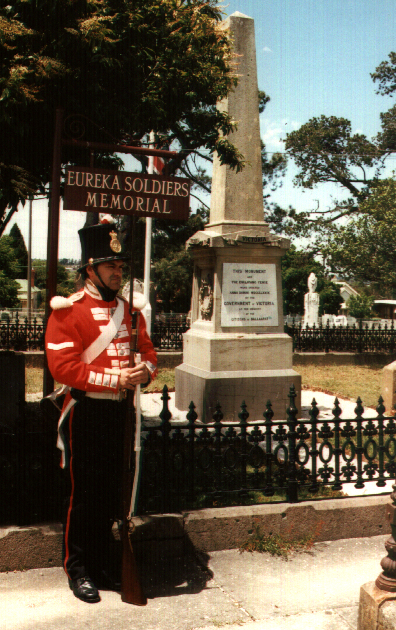 The soldiers who died during the storming of the Eureka Stockade were buried in the Ballaarat Old Cemetery: The day was hot and dusty as the cortege moved along to the place of burial, a slightly rising ground nearly a mile from the township. This rural cemetery was still wild and open; no fence having yet been placed around it, for even this was an expensive process at a goldfield. But some excuse appeared for this apparent negligence, for the ground had evidently been but recently devoted to its present purpose, as a small number of graves amongst a large population indicates[1]

Several headstones were erected to commemorate individual soldiers of the Military: Captain Henry Wise, Privates Michael Roney and Joseph Wall, of the 40th Regiment. and Captain George Littlehales and Privates William Webb, Felix Boyle and John Hall of the 12th Regiment, as well as smaller markers for children of soldiers. It is presumed that, as with British military graves in many other parts of the world, the gravestones were paid for by the individual regiments and maintained by the regiment. The soldiers’ area was unfenced until August 1872 when the Ballarat Council received a ‘voucher from the Department of Public Works for the payment (as loan) of fifty pounds for fencing the Soldiers’ grave at the cemetery when the work has been completed as therein directed’. In 1879 the Government of Victoria ‘at the request of the citizens of Ballarat’ asked for improvements to be made and the Soldiers’ Monument was constructed of Waurn Ponds limestone. [2]

The Diggers' Monument is 5.4 metres tall and 1.2 metres wide at its base. An obelisk mounted on a pedestal carried two marble slabs upon which were inscribed ‘Victoria’ and ‘Duty’. The inscription read ‘In this place, with other soldiers and civilians of the military camp then in Ballarat, were buried the remains of the British soldiers, … who fell dead or fatally wounded a the Eureka Stockade, in brave devotion to duty, on Sunday, the 3rd day of December, 1854, whilst attacking a band of aggrieved diggers in arms against what they regarded as a tyrannous administration’. [3]

The Eureka Monuments are now recognised on the Register of the National Estate being legally registered 30 June 1992. [4]