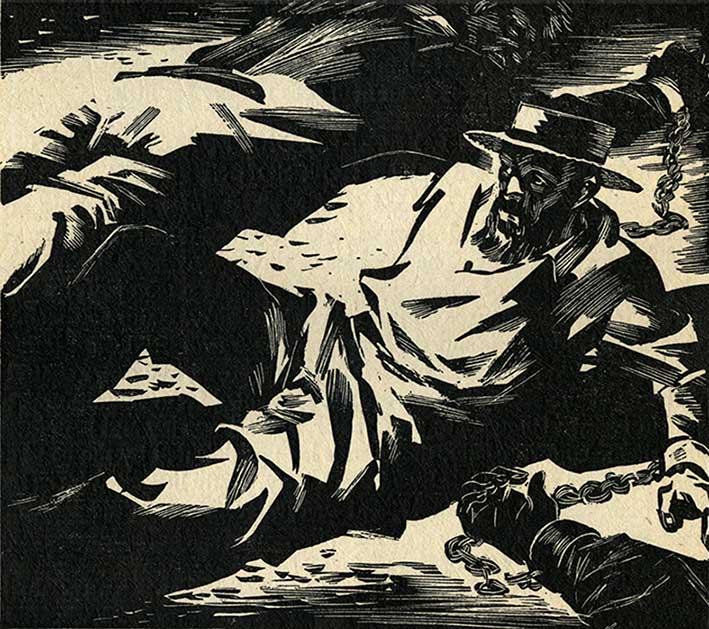 Samuel Stackwell Furnell was a sub-inspector of police at Ballarat and was in command of the Police at the Eureka Stockade on 03 December 1854. In a witness statement Furnell said some time after the firing had ceased, he saw John Fenwick running away at a short distance from the stockade. Furnell cantered after him, and told him he was his prisoner. He endeavored to escape, but being struck and slightly wounded, he yielded.[1] 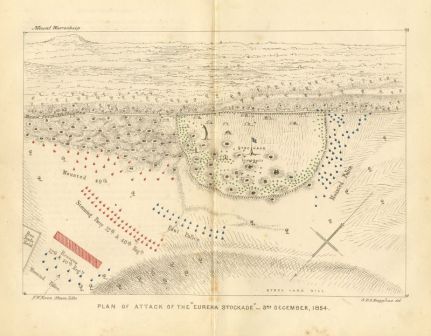 Samuel Huyghue's Plan of Attack of the Eureka Stockade, 03 December 1854.

The Eureka Anniversary. It went without much in the way of celebration, but the 3rd December was one of the historic anniversaries of the colony. The following abbreviated account of the storming of the Eureka Stockade, on the 3rd December, 1854 - one of the best yet published-is taken from "The Early Days of Victoria" in the current number of the "Australian Journal." After describing the events of the week previous and the reasons why Captain Thomas of the 40th, then in command, resolved to attack the stockade early on Sunday morning, the writer goes on to say : in pursuance of this determination Captain Thomas, who was ably assisted by Captain Pasley, R.E., and Captain Wise, had the whole force at his disposal under arms by 2 a.m. on the morning of Sunday, 3rd December. Mr Commissioner Amos, who was intimately acquainted with the locality, acted as guide, and led the troops to within a quarter of a mile of the Stockade. The force consisted of 30 picked men of the 40th Regiment; mounted, under the command of Lieutenants Hall and Gardyne; 87 men of the same regiment, under Captain Wise and Lieutenants Bowdler and Richards; 65 men of the 12th Regiment, under Captain Queade and Lieutenant Paul; 70 mounted police, under Sub-inspectors Furnell, Langley, Chomley and Lieutenant Cossack; 24 foot police, under Sub-Inspector Carter. Total, 100 mounted and 176 foot. The troops reached the ground just as the morning began to dawn, and when about 300 yards from the Stockade the detachments of the 12th and 40th Regiments ex tended in skirmishing order. The mounted men moved to the left, and threatened the flank and rear of the insurgents. As the advance in this order was being made, a sentry within the Stockade gave the alarm by firing his piece. Upon hearing the shot Captain Thomas said "We are seen. Forward, and steady, men ! Don't fire ; let 'the insurgents fire first. You wait for the sound of the bugle." Within the Stockade were about 150 men, and when the soldiers had approached to the distance of about 150 yards they fired a volley, which wounded Captain Wise, Lieutenant Paul, and three men of the 12th Regiment, and killed two and wounded one man of the 40th. Then the bugle sounded the order to fire, and a general discharge brought down all the insurgents who were visible above the enclosure; nine were killed by this volley. Then the order, "On, 40th! Forward!" was heard, and the soldiers cheered, and notwithstanding scattered shots fired at them, rushed at the enclosure with fixed bayonets, followed by the foot police. The hastily arranged face of the enclosure did not impede the troops an instant, and, breaking through it, a series of combats ensued between brave diggers armed with pikes for their ammunition was spent and the soldiers, who had loaded muskets and bayonets fixed. Some, as the swarm of police joined the soldiers, took refuge in the shallow holes and smithy, and, as one of the military officers wrote, many were put to death in the first heat of the conflict, either by bullet or bayonet thrusts." In less than ten minutes the resistance and slaughter were over. Nine soldiers were wounded, one fatally, in the hand-to-hand combats within the Stockade. Vern, with a number of his companions, did not wait to exchange blows with the troops, but escaped by the rear of the Stockade. Lalor, when the troops fired their first volley, was standing upon the top of a logged-up hole close to the barricade, and was shot in the left shoulder as he was in the act of signing to the defenders to retire to the rifle pits. When wounded he fell under a stack of slabs, some of which, in falling, partially covered him, and when the soldiers charged by the spot he was left for dead. While, the soldiers were busy among the tents making prisoners, three non-combatants, whose curiosity brought them to the spot, saw him, and carried him a short distance down the Eureka Lead to a hollow pile of slabs, into which they lifted him. When the resistance was over, fifteen of the diggers lay dead, sight were fatally wounded,and thirty to forty others were more or less severely wounded, some of whom subsequently died. The Southern Cross flag had been torn down by one of the police at an early stage of the combat, and was carried off to the camp. The troops set fire to all the tents In the enclosure and the immediate vicinity, and collecting all the prisoners, to the number of 125, marched back to the camp. Captain Wise died of his wounds before the week ended. [2]