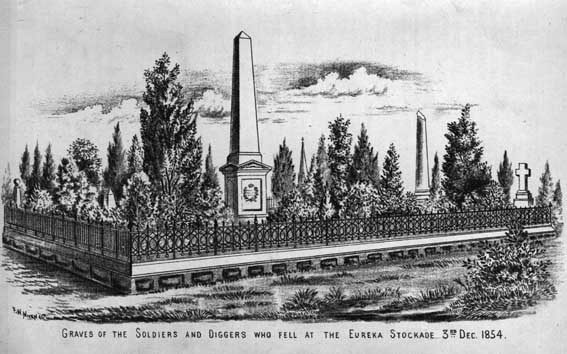 Robert Rattray, the older brother of David Rattray who reportedly had a store at Eureka, became the sexton of the Ballaarat Old Cemetery. Robert and David were the sons of David Rattray and Helen Grant. Robert married Mary Christie on 4 July 1840 at Tibbermore, Perthshire, Scotland. Mary was born in 1812. The couple arrived in Australia in November 1853.[1]

Rattray was residing at Ballarat when he signed the Benden Hassell Petition in 1855. [2]

A special meeting was held on 26 April 1859 to receive and examine applications and testimonials for the office of sexton at the Ballarat Cemetery. Robert Rattray was declared the position. He undertook duties at the Old and New Cemeteries until 1870, when in December of that year a proposal was made to divide the duties of sexton between Robert and his son William. Robert Rattray was appointed to the sole control the Old Cemetery while William took over the control and supervision of the New Cemetery. Each of the received a salary of sixteen pounds, thirteen shillings and four pence per month. Robert Rattray who had occupied the position of sexton for nearly 30 years, resigned in November 1888. He died on 21 September 1894. William Rattray then took over the running of both cemeteries, until he died on 23 April 1914 bringing to a close the Rattray's association with the cemetery.[3]

DEATH.
On the 6th of April, at Ballarat, Mary Ann Rattray, youngest daughter of Mr Robert Rattray, Ballarat Cemetery, from the effect of severe burns received on the same day.[4]

THE LATE ROBERT RATTRAY.
(BY R. R.)
A Sunday evening in the month of July in 1857—more than 37 years ago—the writer was leisurely sauntering up and down Sturt street. This splendid street was then altogether unlike what it is to-day. It is now as handsome and pleasant a promenade as any city in the empire possesses, and one of which we Ballarat people are justly proud. Then Bath’s claim was working at Cobb’s Corner (now the handsome jeweller’s shop), and pedestrians were compelled to pick their way carefully to avoid stumbling into mud holes. It was a rare thing to see people walking in that part of the city in those primitive times. The popular promenade then was the Main road, from the Exhibition Mart away down to Clayton street. The old council chambers were lighted up, and seeing a few persons enter I followed, took a seat at the back, and wondered what was coming. The audience numbered about 70. There were only a few women and no children, and many of the men have since become famous for the conspicuous part they played in making Ballarat such a splendid city. Nearly all of the men are dead and their very names forgotten, but there are three still living, namely, Mr Adam Roxburgh, Mr James Nichol, and the Hon. Duncan Gillies, our present Agent-General in London. We were agreeably surprised to find that divine service in the orthodox Presbyterian fashion were being observed. The minister was the Rev. Mr Baird, of the old Free Church party, and in all probability there are not six persons now living who re-member anything of that preacher. The first psalm given out was the old favorite, the 23rd. The precentor rose and the words were sung to the familiar tune, Wiltshire. It is of the precentor of that evening so long ago I now wish to say a few words. The man was in the prime of life, and a splendid specimen of a Scotchman. He led the singing with that solemnity and pathos which must be heard to be fully appreciated. There were no organs and no choirs to act as aids, and I often think our churches have not made any remarkable progress in sacred music during the past 40 years. The singing in the old council chambers the night referred to was conducted by Robert Rattray, whose funeral took place last Sunday morning, in the presence,of a few relatives and friends. Mr Rattray was born in the fair city of Perth, in the year 1806. He had a distinct recollection of Waterloo and of the extraordinary enthusiasm the great victory aroused all over the old country. He was a keen observer of passing events, and was greatly interested in Catholic emancipation, the passing of the first Reform Bill, the starting of the first railway and steamboat, and above all threw his whole heart and soul into the ecclesiastical movement fiercely raging throughout Scotland, and which culminated in the Free Church Disruption in 1843. Mr Rattray remained for a year or two in Geelong. On coming to Ballarat he engaged in mining, and about the year 1859 was appointed sexton of the Cemetery, which office he held for about 30 years, giving entire satisfaction to the trustees and the community at large. While sexton there have been close upon 20,000 funerals in the two cemeteries. For about, 12 years, from 1858 to 1870, Mr Rattray was an elder of St. Andrew’s Presbyterian Church, and greatly interested himself in the formation of that congregation, giving most liberally of his time and means to the erection of the new kirk and to all other enterprises of a similar character. From the year 1870 Mr Rattray had been connected with St. John’s, but could not be persuaded to act in the capacity of elder. It is needless to remark that Mr Rattray was greatly beloved, and away back at the close of the fifties and early in the sixties, the writer spent many a pleasant and profit-able evening at his happy and cheerful fire-side. Our friends are rapidly disappearing, and the founders and builders of our beautiful city will, before many more suns have set, be quietly sleeping until the trumpet sounds the Resurrection Morn. Mr Rattray attained the great age of 88 years, peacefully falling in sleep, and his body was quietly committed to the grave at an early hour last Sunday morning.[5]