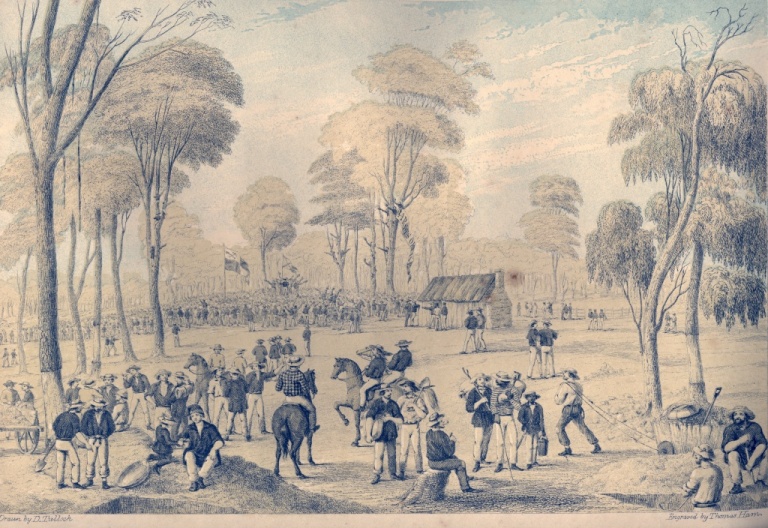 Robert Booley was politically active families in Ipswich, County Suffolk, England. He was a non-conformist and fought for the Chartist principals of equal rights and representations for all men. He married MaryAnn and arrived in Australia with his family on the Berkshire in 1848.[1]

A leading figure in the Chartist agitation of 1838/1839 was Robert Booley a coach smith and ship owner from Ipswich in Suffolk, England. Robert Booley was a non-conformist lay preacher (Wesleyan) active in political life and a pioneer of both the trade union and Chartist movement in East Anglia.[2]

In March 1838 Robert Booley spoke at three meetings in Ipswich in support of the secret ballot and manhood suffrage. From these meetings came the formation of the Ipswich Working Men’s Association, the first formal Chartist organization in Suffolk. At the formation of the group, Booley had said “ …...let us act with prudence and carry our arguments with moral energy, and such a voice will be raised that no legislature will be able to silence us”. In October 1838 Robert Booley was an unsuccessful candidate for the Ipswich Town Council and later became active in collecting signatures for the charter.[3]

Robert Booley is buried at Lake Bolac Cemetery in an unmarked Grave.[4]

Robert Booley spoke to disenchanted diggers across the goldfields, including at Mount Alexander in November 1851.[5]

Robert Booley remained active in the people’s association, which reached a peak of activity in the period following Eureka. Three large well-attended meetings were held in Geelong in the weeks after Eureka to protest at the treatment of the rebels by the government.[6]

Robert Booeley's son, Robert Francis Booley, was born in Suffolk, England. Robert Booley Jnr and Catherine McPherson (1829-1869) arrived at Point Henry, Victoria on board the Berkshire on 03 October 1848. Robert and Catherine married in Geelong in 1849. Both came from politically active families in Ipswich, County Suffolk, England. Both families were non-conformist believers, refusing to accept the impositions of the Church of England and fought for equal rights and representations for all men. Robert Jnr died in 1975 and is buried at the Ballaarat Old Cemetery (Section 4 Row 1 Grave 26). [7]