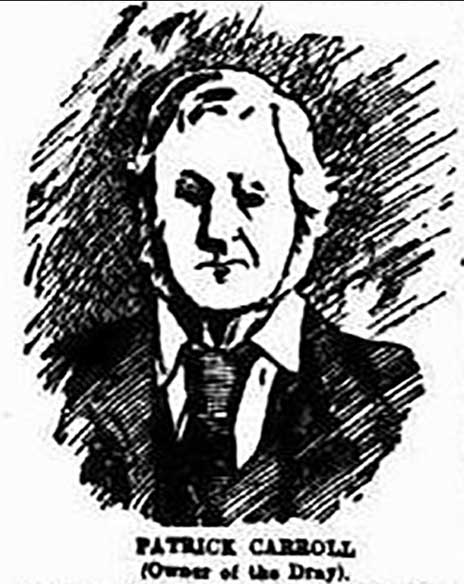 Patrick Carroll was born in 1816 at Castleconnel, County Limerick, Ireland to parents John Carroll, a gardener, and Mary Shea. Patrick married Margaret Darcy. He left Plymouth, England 1 November 1841, with his wife, and John, his son, who was then aged one year and ten months old. They sailed for Australia aboard the Regulus and arrived in Port Phillip on 19 February 1842. On arrival, Patrick was employed in building the first jetty in Yarra Street, Geelong. One day the boat they had taken out, filled to overflowing with stones, capsized. All the men, including prisoners from the gaol who were helping in the building of the jetty, were thrown overboard and many lost their lives. Patrick Carroll, not being able to swim, clung to an oar, and was the last man taken out of the water. He was lucky to have survived the ordeal. Their son recalled that they were living at the Breakwater, Geelong in a sod hut of two rooms thatched with grass. They then went to Port Fairy to work for the Manifolds, Patrick as a rouseabout and Margaret as a wet nurse. After leaving Port Fairy he worked for Mr James Strachan at the Breakwater, Geelong. He stayed for some time till he moved to South Geelong where he bought a horse and dray and started wood and water carting. He also had cows, so was doing very well for himself. [1]

When gold was discovered the Carroll family were living in a slab house in Corio Street. Patrick Carroll, with his family and horse and dray travelled to Ballarat, the journey taking a couple of days. When the Bendigo Rush broke out, Carroll returned to Geelong with his family, and leaving them in Geelong proceeded to Bendigo to try his luck at gold mining. By 1852 there were six children in the family and after some success mining he started a carrying business between Geelong and Ballarat. In 1853, Margaret passed away and was buried at Geelong Eastern Cemetery on 28 February 1853. Patrick married to Catherine Mullins, nee Connor, on 27 January 1854. She was a widow with three children. They later had three more sons. By 1854 Carroll had three two-horse drays and was helped in the carting business by his sons, John and Michael.[4]

Born in Geelong on 17 April 1842 I have now plassed my long journey having passed the 81st milestone in my long journey through life and as I can't expect to reach many more mileposts I now make this solemn statement and it may not be long befoe I will have to make my maker to give an account of doings in this would and I now say it was my father Patrick Carroll who took all the risk in Lalors escape I his son was the one who drove the dray In which he rode and after three days and nights we arrived safely in Geelong.
Signed
Michael Carroll [5]

Around the time of Eureka, Carroll was camped at Yuille’s Swamp and it was in February 1855 that Carroll took the wounded Lalor to Geelong in his waggon. This was in the company of Tommy Marks and Carroll's son Michael.[6]