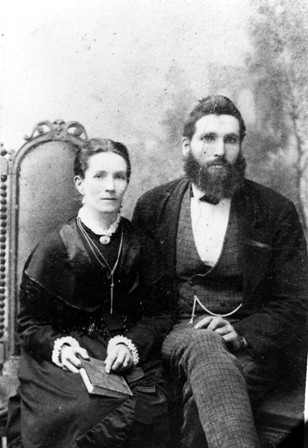 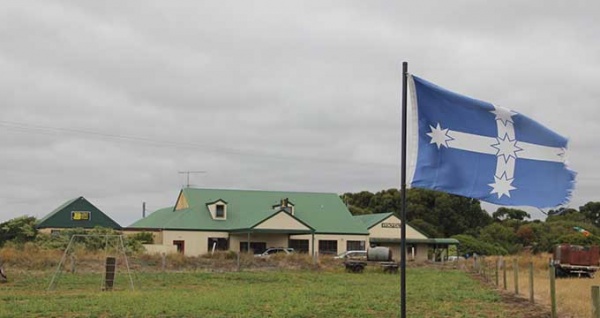 Michael O'Dea was born in 1824 at Kilteely, Co. Limerick, Ireland, the son of John O'Dea and Penelope Meagher. Michael initially arrived in Sydney, from there he went to California as a '49 miner, then returned to Yass, New South Wales. Michael O'Dea married Mary Purtell on 1 June 1848 at Bowning, New South Wales, and they overlanded to the Tower Hill region soon after. At Killarney (Victoria) O'Dea was initially a tenant farmer on Rutledge's Farnham Survey, Look Out Hill.

Once gold was discovered Michael O'Dea used his Californian experience to search for gold at Ballarat. Michael and Mary's daughter, Mary was a very early birth on the Ballarat goldfield. The birth is unregistered, but is listed as 1849 within the family.

In 1852 Michael and Mary established the property 'Cloverfield', Crossley, Tower Hill and is thought to have supplied the Ballarat goldfield, spending enough time prospecting for gold to become friends with stockaders such as Patrick Sheedy.

Michael O'Dea died in 13 July 1876 at Kirkstall, and was buried at Tower Hill Cemetery. Michael O’Dea left his property to his daughter, Mary Lenehan, and her children. This included ‘Cloverfield’ later known as ‘Clover Hill’ (north east of the Killarney Hotel).

Michael O'Dea served on the Belfast District Road Board from 1858 to 1861. He sold his stock and farming equipment in 1861 and built the Carleton Inn, Killarney, Victoria. Michael O'Dea's sister, Bridget O'Dea, married John Lynch of Kilteely, Ireland. (Lynch was also from Limerick and his mother was an O'Connell.) [1] 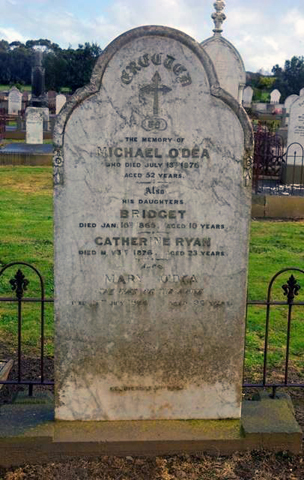 Another of the early settlers at this district has gone to his “long home”. We allude to Mr Michael O’Dea whose death took place on Thursday last. For some time previously Mr O’Dea had been suffering from a complication of disorders arriving principally from consumption. The deceased was a very old resident of the district although, in reality, not a very old man. He came to the Western district from California many years ago, and was one time proprietor of the Carleton Hotel, Killarney, which building was erected by him, but afterwards partially destroyed by fire. After the fire Mr O’Dea devoted his attention to farming pursuits in which he was very successful. In the days of the Old Belfast District Road Board, Mr O’Dea for several years was a member of the body, but beyond this he took no very active part in public affairs.

BARBER and ARDLIE, Kepler-street, Warrnambool, solicitors for the said executors. RE MICHAEL ODEA (Deceased)-Pursuant to "The Statute of Trusts 1864," notice is hereby) given, that all creditors and others having any claims or demands upon or against the estate of Michael O'Dea, late of Cloverfleld, in the parish of Koroit, In the county of Villiers, in the colony of Victoria, farmer, deceased, who died on the 13th day of July, 1876, and probate of whose will was granted by the Supreme Court of the said colony, in its Probate jurisdiction, on the 24th day of August, 1876, to William Anderson, of Rosemount, In the County of Villiers, in the said colony, farmer, and William Charles Davies, of Koroit, in the said county, bank manager, the executors appointed by the said will are hereby required to SEND in the PARTICULARS of such CLAIMS or demands to the said William Anderson and William Charles Davies, or to the undersigned, their solicitors, on or before the twelfth day of March next; and notice is hereby further given, that after that day the said executors will proceed to distribute the assets of the deceased among the parties entitled thereto, having regard only to the claims of which they shall then have notice, and that they will not be liable for the assets or any part there of so distributed to any person of whose debt or claim they shall not then have had notice.
Dated this nineteenth day of January, 1877.
BARBER and ABDLIE, Kepler street, Warrnambool, solicitors for the said executors.[4]

On Friday last, says the Banner of the 24th inst., the party of surveyors, who are at present engaged in making a flying survey of the proposed line of railway which is to connect Hamilton with the seaports of Belfast and Warrnambool, were encamped on Mr Michael O'Dea's farm near Kirkstall. We understand that the operations of the party will for the present be confined to selecting the best line along the Main Penshurst Road, for the branch line from the proposed terminus near Koroit to Belfast. Since their arrival in the district the survey party have been engaged in making surveys from Warrnambool in the direction of Koroit and they will now, no doubt, continue their work in the direction of this town. [5]

James Conners, an aged man, was charged with perjury. Mr Adamson stated that prisoner was in the habit of frequenting Clarke's Carleton Inn, at Killarney. He frequently gave orders on employer, Michael O'Dea, for cash received from Clarke, or for drinks had at Clarke's Inn. On the occasion referred to in the indictment, on the 2nd or 3rd of March last, prisoner gave an orler on O'Dea for £2, receiving £1 in cash, and an order previously given to Clarke for £1. He signed this order in the presence of Clarke and a man named John Lynch, who witnessed his signature, but on proceedings being taken against him he swore that he never saw the order before, that he did not sign it, and could not write his name. Several witnesses were examined. Lynch and Clarke swore that he wrote the signature, but it was also given in evidence that he usually made only his "mark." to such documents. Mr Wrixon addressed the jury on behalf of the prisoner, contending that if he did write it he must have been unconscious of having done so, from the length of time he was drinking in Clarkes, if so he was not guilty of perjury. His Honor in summing up concurred in this view of the case, and the jury without leaving the box acquitted the prisoner. [6]