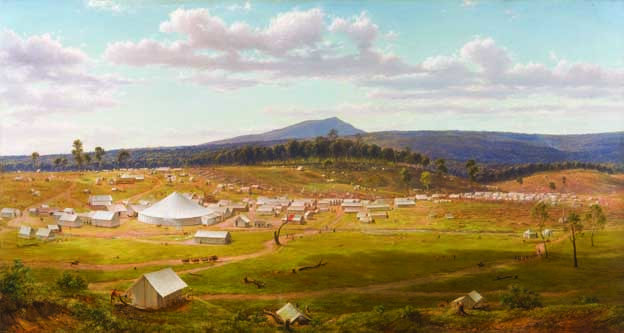 Eugene von Guerard, Old Ballarat as it was in the summer of 1853-54, 1884, oil on canvas, mounted on board, Art Gallery of Ballarat Collection, Gift of James Oddie on Eureka Day, 1885.

"BALLARAT FINE ART PUBLIC GALLERY.
Four valuable pictures have just been added to the gallery. One, lent by the president, Mr James Oddie, apart from its intrinsic value as a work of art, will be deeply, interesting to the inhabitants of this district. lt is a representation of old Ballarat, by the well known artist, M. von Guerard, taken from the Commissioners’ Hill, near the site now occupied by Craig’s hotel. It was lately, exhibited in Melbourne, at Mr Fletcher’s Art Gallery, and we subjoin the excellent criticism published in the Argus of 12th January last:— “ All the sketches for it were made on the spot upwards of 80 years ago, and its accuracy in every detail will no doubt be recognised by many old inhabitants of that goldfield. The scene embraces the whole of the flat, with Rowe's Circus pitched pretty near the centre of it, and numerous stores, restaurants, and places of public entertainment, each a faithful copy of the original, and each filling the position in which it then stood. There is the first Catholic church, dedicated to St. Alipius, with a cross above its canvas gable; the first Protestant church, the primitive post-office, the Yarrowee winding through the valley, the road to Buninyong, the gravel-pit lead, still populous with diggers; and on the ‘high ground beyond ‘the forest primeval,’ with the bulky form of Mount Warrenheip rising up behind it. And in one portion of the picture the artist has introduced a characteristic incident of the period—a number of diggers being - escorted to the lookup at the Commissioners’ Camp by the police for having been found working without a license. M. von Guerard has aimed at literal fidelity and topographical accuracy, and in this respect the picture possesses the highest value, and in duces the wish that we could obtain equally trustworthy pictorial transcripts of each of our Victorian cities in their infancy. As a work of art, we prefer it to any picture from the same easel we have seen for a long time past. It is warmer in tone and better in colour. The vegetation is beginning to yellow beneath the hot sun of the early summer, and the distance is cleverly managed. Mr Oddie is to be congratulated upon the happy thought of commissioning such a work, which is not unlikely to find its way into some public institution in Ballarat at some future day; and as time removes the inhabitants of that city still farther away from the epoch at which the sketches were made, the picture is sure to be regarded with increasing interest and curiosity.” ... [1] 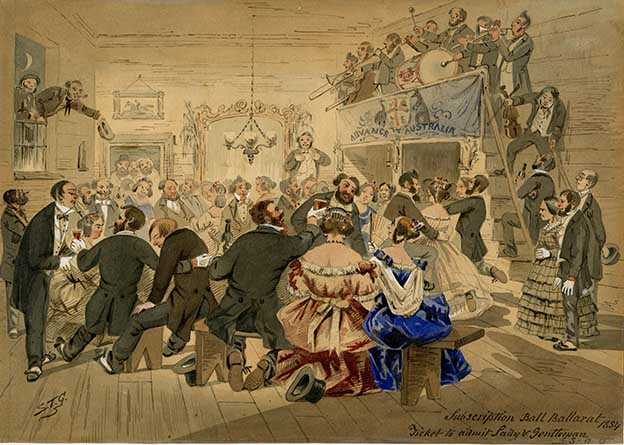