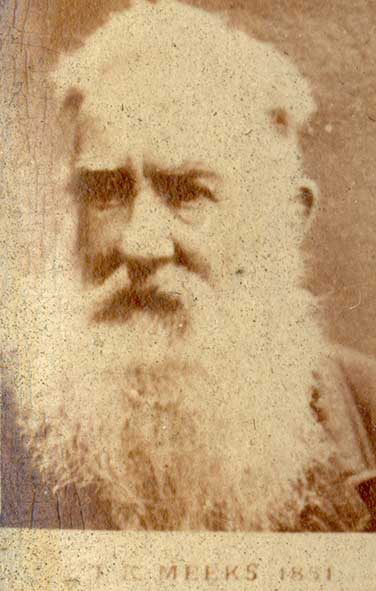 James McKain Meek was born at Great Yarmouth, Norfolk, England in 1815[1], arriving in Sydney 1938 where he reputedly tutored the children of Governor Gipps.[2] James Meek married Julia Ann Craig (1816-84), the governess to Governer Gipps' children. Four children were born between 1844 and 1851.[3]

Between 1891 and 1898 Meek returns to Ballarat, where he lives and works at Ballarat Benevolent Asylum.[5]

In 1893 the Ballarat Star described the work: An Industrial Inmate. At the conclusion of Monday's meeting of the Ballarat Benevolent Asylum Committee one of the inmates, named James McKain Meek, having been introduced, laid upon the table a magnificently executed work of art, bearing the following inscription: - The past and present of Ballarat, or 40 years' progress from an uninhabited wilderness, 1852 to 1892, during which time it has become the grandest inland city of the Southern World. It stands unrivalled by that of any city in her Britannic Majesty's extensive domain over which the sun never sets, and o'er which Albion's beloved sovereign sways her benign sceptre." The work conveys by words and pictorial representations a complete history of Ballarat from its inception up to the 17th March inst. The various pillars and scrolls by which the many incidents that are related are surrounded are marvellously executed, the plain and ornamental lettering is exquisite; while the language used in the narrative is of the most eloquent and refined description. Sketches of the Ballarat Hospital and Benevolent Asylum, equal to any photographic picture, are shown at either end of the word " Ballarat," which occupies the most central position of the chart. The work, which is worthy of a position in any public library or private residence, has been designed and composed by Mr. Meek, who is 78 years of age, at the Asylum. It is done entirely with pen and ink, and was commenced on the 22nd October, 1892, and completed on 17th March, 1893.[6]