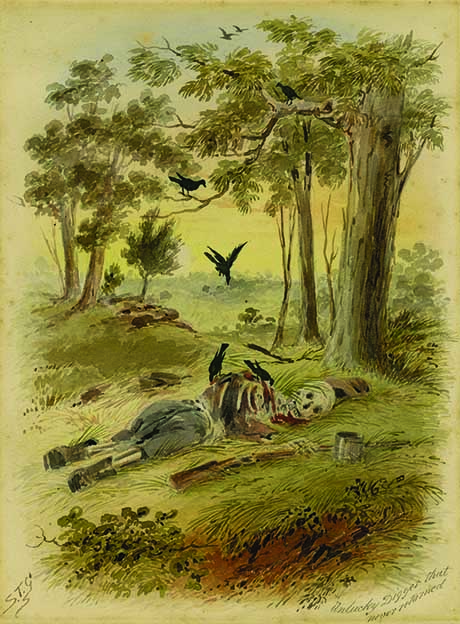 REMEMBERED EUREKA.
GUNDAGAI PASTORALIST'S DEATH.
A well-known pastoralist, Mr. Jamos Beveridge, of Tenandra Park station, Gundagai, died at the residence of his daughter, Mrs A. L. Wade, Cheltonham-road, Burwood, on Sunday, in his 83rd year. Born at Stirling, Scotland, in 1833, he sailed for Melbourne in 1852, and on his arrival proceeded to the goldfields at Ballarat, where he was fairly successful. While at Ballarat he was a spectator of the Eureka Stockade fight. He afterwards decided to take up pastoral pursuits, and eventually became Manager of the Wantabadgery station, on the Murrumbidgee River. He then took up Tenandra Park station, which he held to the date of his death, and at different dates became the owner of Naraburra, Bonnie Doone. Dingi Dingi, Eringoarrah, and tho Billabong stations. His eldest Bon, Mr Steel Beveridge, of Mullah station, Trangle, predeceased him, and the leaves a widow, two sons, (Mr. J. W. C. Beveridge, of the Billabong, ard Mr. W. O. W. "Beveridge, of Eringoarrah, Wagga Wagga), and three daughters. The latter are Miss A. L Wade (Burwood), Mrs E.A. Stinton (Wagga Wagga), and Mrs. James Smith (Cowra).[1]