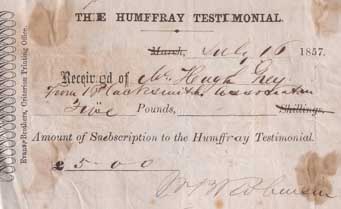 Born in Scotland, Hugh Gray was on the goldfields from September 1852.

Hugh Gray signed the 1853 Bendigo Goldfields Petition. Agitation of the Victorian goldfields started with the Forest Creek Monster Meeting in 1851, but what became known as the Red Ribbon Movement was centred around the Bendigo goldfields in 1853. The Anti-Gold License Association was formed at Bendigo in June 1853, led by George Thomson, Dr D.G. Jones and 'Captain' Edward Browne. The association focused its attention on the 30 shillings monthly licence fee miners were required to pay to the government. They drew up a petition outlining digger grievances and called for a reduced licence fee, improved law and order, the right to vote and the right to buy land. The petition was signed by diggers at Bendigo, Ballarat, Castlemaine, McIvor (Heathcote), Mount Alexander (Harcourt) and other diggings. The 13 metre long petition was presented to Lieutenant-Governor Charles La Trobe in Melbourne on the 01 August 1853, but their call for a reduction in monthly licence fees and land reform for diggers was rejected. The diggers dissatisfaction erupted into the Red Ribbon Rebellion where agitators wore red ribbons on their hats symbolising their defiance of the law and prohibitive licence fees.

Hugh Gray gave evidence in the Goldfields Enquiry of 1855.

The Exhibition in the hall of the Mechanics’ Institute was crowded again on Tuesday evening, the receipts for the evening amounting to £30. Several electrical machines have been added to the list of exhibits. One of these, by Mr Hugh Gray, and an air pump by the same exhibitor, are partly composed of brass molten in the fire of Bentley’s Eureka Hotel, on Specimen Hill, prior to the Eureka Stockade tragedy, so these exhibits may be said to have a quasi-historical interest about them. …….[1]