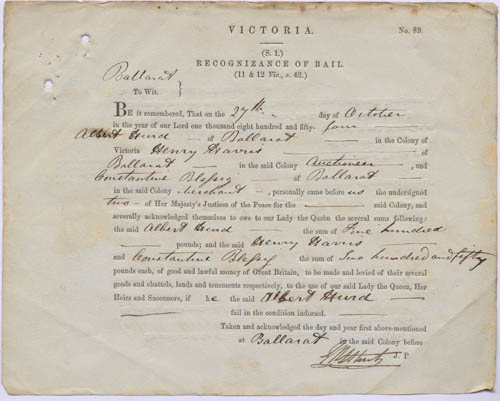 "Official form on blue paper - evidence - Henry Harris, auctioneer, 27 October 1854, PROV, VPRS5527/P0 Unit 1, Item 70 Recognizance of Bail
Be it remembered, that on 27th day of October in the year of our Lord One thousand eight hundred and fifty four Albert Hurd of Ballarat in the Colony of Victoria Henry Harris of Ballarat in the said Colony Auctioneer, and Constantine Blessig of Ballarat in the said Colony, Merchant, personally come before me and the sum of five hundred pounds, and the said Henry Harris and Constantine Blessig the sum of two hundred and fifty pounds each of good lawful money of Great Britain, to be made and levied of the goods and chattels, lands and tenements, in the use of our said Lady the Queen, her Heirs and Successors, if the said Albert Hurd shall in the condition indorsed.
Taken and acknowledged the day and year of your first above mentioned at Ballarat in the said Colony before me
EPS Sturt JP 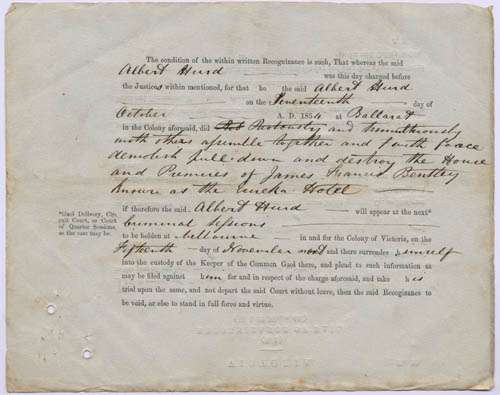 "Official form on blue paper - evidence - Henry Harris, auctioneer, 15 October 1854, PROV, VPRS5527/P0 Unit 1, Item 70
The Condition of the within written Recognizance is such, That Whereas Albert Hurd was this day charged before me a Justice of the Peace within mentioned, for that he be the said Albert Hurd on the Seventeenth day of October 1854 with others at Ballarat did with force demolish pull down and destroy the House and Premises of James Francis Bentley known as the Eureka Hotel it therefore to the said Albert Hurd shall appear at the next Criminal Sessions to be holden at Melbourne in and for the Colony of Victoria, on the Fifteenth day of the November A.D., 1854, and there surrender myself into the custody of the Keeper of the Common Gaol there, and plead to such information as may be filed against him for and in respect of the charge aforesaid, and take his trial upon the same, and not depart the said Court without leave, then the said Recognizances to be void or else to stand in full force and virtue.

Henry Harris was an auctioneer.

Henry Harris claimed for just over 45 pounds for goods stored at James Bentley's Eureka Hotel, and destroyed in the fire of 17 October 1854. The claim was rejected.[1]

Henry Harris ran the Clarendon Hotel, and in 1858 subscribed to Henry Archer's 'Facts and Figures'. In 1858 he offered to buy the Welcome Nugget' but the owners would not sell. Instead the nugget was exhibited in the hotel for a fee which was donated to the Ballarat Benevolent Asylum. Mothers were allowed to sit their babies on the nugget for good luck. According to the Bendigo Advertiser, 6 January 1860, "Yesterday, at Mr. Dean's, El'zabeth-street, we inspected a remarkably good model of the celebrated Welcome Nugget. The model has been manufactured by Mr. Henry Harris, late of Ballarat, and is an exceedingly accurate imitation of the monster lump of gold. Those of our friends who were not fortunate enough to obtain a glimpse of the veritable nugget, will be able to gratify their curiosity, and form some idea of the mineral wealth of Victoria at the same time, bv paying a visit to Mr. Dean's establishment, in whose shop window the model is at present exhibited. It wou'd have been well ha 1 models of all the more notable nuggets obtained on the Victorian gold fields been placed in our museum, since comparatively few persons are able to examine the nuggets themselves, The Welcome is now no more, having found its way to the melting pot of the Royal Mint. [2]

Harris was first President of the Ballarat Jewish Synagogue which was established on 12 November 1855. [3] He was a prominent Freemason.[4] Henry Harris was installed as the first Worshipful Master of the Victoria Lodge (formed on 28 September 1855).About 30 brethren including Camp Officials, professional gentlemen and leading merchants attended the first meeting at the Clarendon Hotel. [5]

The Ballarat Chamber of Commerce was established on 5 August 1856 with a meeting at the Montezuma Hotel, Ballarat East. The committee comprised R. Muir (chair), John Basson Humffray, W. B. Robinson, Henry Harris, William B. Rodier, R. B. Gibbs, and Charles H. Edwards.[6]