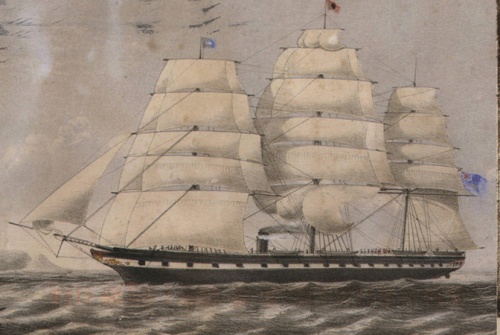 Launched in 1843, the SS Great Britain was built by Isambard Brunel, and was the first iron ship, and the first with a propeller. Wooden hulled ships and paddle steamers had some problems, which Brunel solved by building a steel hulled ship that could withstand the rigours of commercial shipping.[1]

The Great Britain served the Liverpool to New York luxury trade, then was refitted for the Liverpool to Port Melbourne route from 1852. Gold fever had hit Victoria, and on one return trip there was 6 tonnes of gold in the hold.[2]

In 1861 the Great Britain brought the English cricket team to Australia. During that journey the ships captain ordered the sails up to conserve coal, which fired the steam driven propeller.[3] The team were paid 150 pound a man and travelled first class. their first game was watched by a crowd of over 15,000. (Tour Record: Played 12, Won 6, Drawn 4, Lost 2)[4]

After decades of service the SS Great Britain was severely damaged rounding he Cape of Good Hope, and was laid up in the Falklands Island from where its hull was eventually retrieved and the ship has now been refurbished and serves as a tourist attraction in Bristol, England.[5]