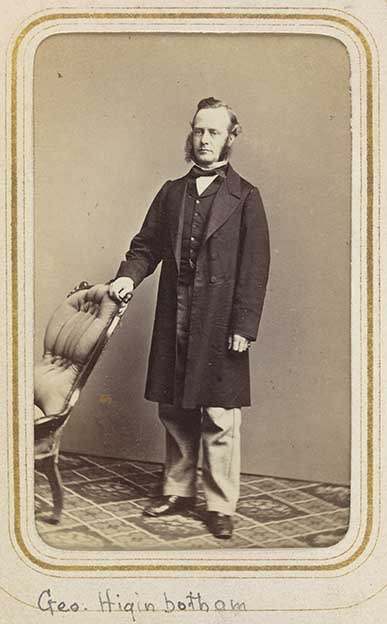 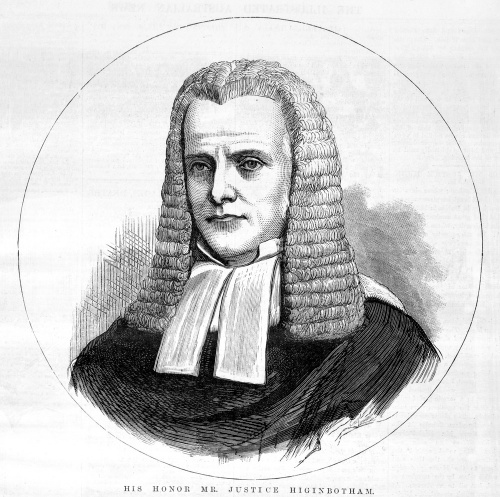 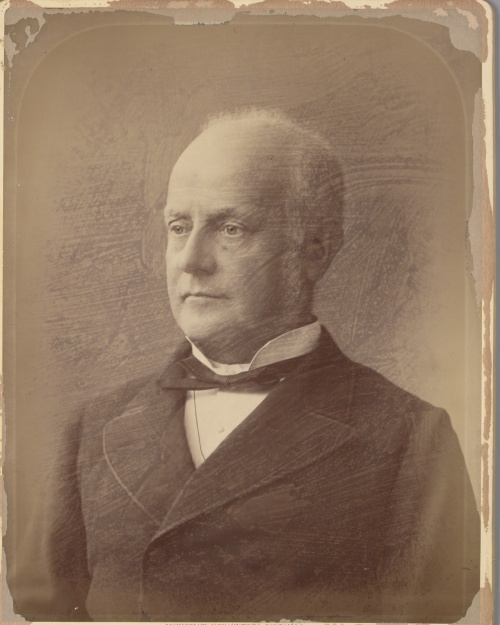 George Higinbotham was born 19 April 1826 in Dublin, Ireland, into an Anglo-Irish family. His secondary education was at the Royal School of Dungannon, Co. Tyrone. He arrived in the Colony of Victoria via the Briseis in March 1854. He died in Melbourne on 31 December 1892.[1]

While establishing himself as a barrister in Melbourne, Higinbotham wrote anonymously for the Melbourne Morning Herald from early April 1854 until March 1856. There is evidence that he visited Ballarat in mid-October 1854 at about the time of the burning of the Eureka Hotel, and possibly also Castlemaine and Bendigo.[2] His purpose was to investigate security at the Herald’s offices following two major burglaries at the Ballarat office. Following the trip, he wrote an editorial detailing the scandalous state of the administration of the law on the goldfields.[3] He warned of imminent bloodshed if the Government did not immediately reform the administration of the Goldfields.

His call resonated with William Mollison, the member for Kyneton in the Legislative Council, who moved for an independent inquiry into these ‘prejudicial reports’.[4] The Government countered that it would establish its own enquiry, and Mollison withdrew his motion. Both the Herald and the Argus immediately denounced the Government’s enquiry as unsatisfactory. In late November Higinbotham wrote a lengthy leading article reviewing the sequence of events that had culminated in the violence in mid-October, including the murder of the miner, James Scobie. He argued that injustices to the mining population had caused the violence. He warned the Governor that ‘worse would follow if the diggers’ grievances were not addressed.’[5]

Five days before the battle at the Eureka Goldfield the miners sent three delegates to meet the Governor, the Attorney-General, William Stawell, and the Colonial Secretary, John Foster, to seek redress of their grievances. Their highest priorities were the arbitrary arrest of three men in connection with the burning of the Eureka Hotel, and the denial of the political rights of the goldfields population in the draft Constitution that had been sent to London.[6] The Government refused to concede on either issue.

The following day Higinbotham wrote an editorial praising the diggers as ‘the salt of the earth’, and defending their right to assemble, yet pleading with them to refrain from illegality.[7] Two days before the battle at Eureka, Higinbotham warned that the goldfields were likely to become ‘the arena of a conquest of brute force and tyranny over reason and humanity.’ He urged the immediate discontinuation of the gold license fee ‘before many a poor fellow has been unnecessarily sacrificed.’[8]

When the military conflict approached, Higinbotham was misled by someone whom he identified only as ‘the highest authority in Melbourne’. Relying on this person, he informed the Herald’s readers that, notwithstanding reports to the contrary from the freelance correspondent Frank Hasleham in Ballarat, the goldfield was tranquil. It is possible that, being young and inexperienced, he had been deliberately deceived so that the Herald would convey to its Ballarat readers no hint that the approaching troops knew of their preparations for armed conflict and were planning a surprise attack. This error of judgement was to be a source of painful regret to Higinbotham.

Following the hostilities at Eureka, Higinbotham’s colleagues at the Herald, the barristers Archibald Michie and Butler Aspinall, defended some of the prisoners from Eureka, and vocally attacked the Government for abandoning the rule of law and resorting to violence. Perhaps feeling indebted to Attorney General Stawell because he had benefited from a number of prosecution briefs, Higinbotham was more circumspect. Yet under cover of journalistic anonymity he advised the Goldfields Reform League of Sandhurst that the Government’s prohibition of a planned mass meeting at Bendigo was illegal.[9]

Higinbotham was deeply troubled by the conflict at Eureka and viewed it as a consequence of a seriously defective political system. He believed that the Governor had been motivated by a desire to please the Colonial Office in London rather than to serve the Victorian population. He devoted the rest of his life to advocating for a truly democratic form of colonial government, independent of the Colonial Office.

In November 1855 the new Victorian Constitution was inaugurated, but fearing movements for its reform in the Legislative Council, Governor Charles Hotham claimed autocratic powers for himself and future governors. Higinbotham led a formidable press campaign against the claims, and galvanised support in the Legislative Council.[10] This opposition, combined with Hotham’s unexpected death, saw the defeat of his claims.

Editor of the Argus

From August 1856 until mid-1859 Higinbotham served as the editor of the Argus, and, to the irritation of the owners, continued to advocate democratic reform. He finally tendered his resignation when the ideological differences become insuperable.[11]

At a by-election in May 1861 Higinbotham briefly won the seat of Brighton in the Legislative Assembly, and cemented his hold on the seat in April 1862 at a second by-election.

In June 1863 Higinbotham became Attorney General in the ministry of James McCulloch. In January 1865 the Confederate warship CSS Shenandoah arrived in Melbourne seeking repairs, provisions and crew. Contradictory signals from London presented a deep dilemma for Governor Sir Charles Darling regarding the Captain’s requests. He sought advice from Higinbotham and his Justice Minister, Archibald Michie. Their advice prioritised practical over legal considerations, and in the long run the Shenandoah incident (as it became known) produced adverse consequences for Britain.[12]

In 1865 the Government planned to introduce a reformed tariff. Fearing obstruction by the Legislative Council, Higinbotham advised the Government to join the Tariff Bill to the Appropriation Bill, for under the Constitution the Council could not amend Appropriation bills. However, the Council objected to the ‘tack’ and refused to pass the entire Bill. The Government resigned, but Governor Darling arranged for it to continue in office through an unorthodox financial procedure involving bank loans. The Council petitioned the Queen to intervene in the ‘revolutionary’ arrangement, and on 17 April 1866, Darling was recalled in disgrace.[13]

Higinbotham urged the Legislative Assembly not to allow Darling to be ‘ruined in fortune or in reputation’, and proposed a grant of ￡20,000 by way of a gift to Lady Darling. This precipitated a new constitutional crisis. Fearing to lose face if the Council should relent and allow the Darling Grant to pass, the British Government re-instated Darling in the Colonial service, thereby making the grant unnecessary. To Higinbotham’s disappointment, the two constitutional crises, which he had hoped would force an acknowledgement of the Legislative Assembly’s right to control the Government’s finances failed to do so.

In 1866 Higinbotham chaired a Royal Commission into Public Education. He sought the co-operation of the churches in extending primary education to all children in Victoria, regardless of their parents’ ability to pay fees. Appended to his Report was a draft bill for a system of Public Education, however this bill was never voted upon.[15] Nevertheless, it served as a model for a new Bill that succeeded in introducing a system of public education in December 1872 under the Minister, James Wilberforce Stephen.[16]

In 1880, Higinbotham accepted an appointment as a judge of the Supreme Court. He continued his advocacy of responsible government by objecting to the Governor’s right to issue a pardon or a reprieve following a judgement. In September 1886 he was appointed Chief Justice of the Supreme Court. The full bench heard the case of Musgrave v Toy, which raised the issue of whether the Victorian Constitution provided for responsible government. To his dismay, Higinbotham found that a majority of his brother judges disagreed with his view that it did so.[17]

A Friend of Labour

In 1890 a maritime strike in Sydney spread to the whole of Australia and continued for the next two years. As Chief Justice of Victoria Higinbotham caused controversy when he broke with protocol and publicly donated to the workers’ strike fund, promising to continue to donate until the shipowners agreed to a conference with the unions. However the strike collapsed and the shipowners emerged triumphant. Higinbotham’s gesture infuriated many conservative people but endeared him to the Union movement.[18] 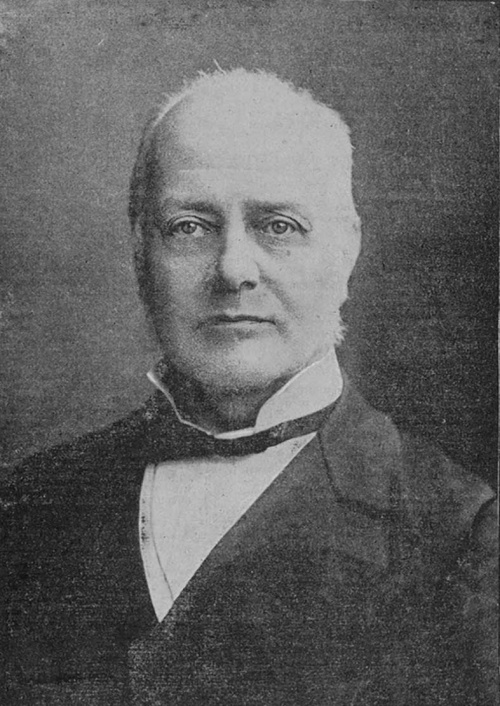 Higinbotham died at his home in South Yarra from heart disease on 31 December 1892. He is buried in the Brighton Cemetery. He was survived by his wife Margaret (neé Foreman), and four of his 5 children: Edith, Alice, George, Edward, and Maud. His youngest daughter, Ethel died at eleven months and is buried with his brother Thomas in the graveyard of St Andrews, Brighton. Although the Argus had been a relentless critic during his parliamentary career, in death it was one of many newspapers that paid him a high tribute: No man in his time played a more conspicuous and more important part in the making of the Colony and no man has cut a deeper groove in its political destinies … He was a leader in journalism, in politics and in law.

Following his death in 1895 the family acted upon Higinbotham’s own instruction that, after his death, all of his papers were to be burnt. His son-in-law Edward Morris wrote a biography of him in 1895, concentrating on his later public life, but with the loss of biographical resources of a personal kind, a deeper understanding of this important man has been difficult to achieve.

In 1884 Higinbotham’s portrait was displayed above the Speaker’s Chair in the Council Chamber of the Victorian Trades Hall Council. This and three other portraits were painted over in the 1960s but are currently being restored. A statue of Higinbotham wearing his judicial wig and gown was created by the London-born sculptor Paul Montford in 1937 and is sited outside Melbourne’s Treasury building in Macarthur Street, a short distance from the Parliament in which he served with such distinction.

This George Higenbotham page was written by Geraldine Moore, 13 December 2018.
Retrieved from "http://www.eurekapedia.org/index.php?title=George_Higinbotham&oldid=20138"