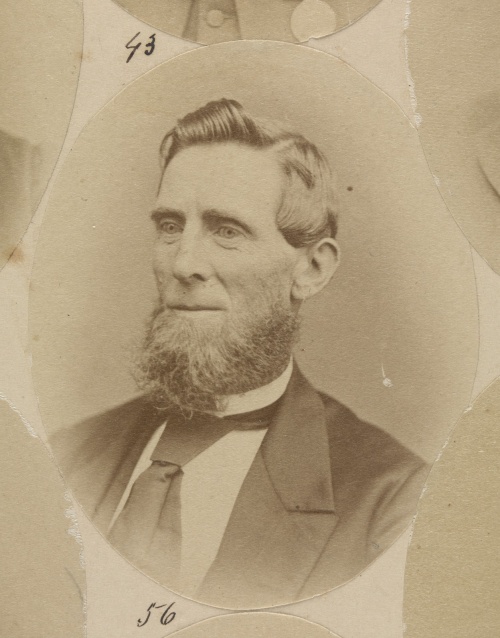 George Aspinall signed the 1853 Bendigo Goldfields Petition. Agitation of the Victorian goldfields started with the Forest Creek Monster Meeting in 1851, but what became known as the Red Ribbon Movement was centred around the Bendigo goldfields in 1853. The Anti-Gold License Association was formed at Bendigo in June 1853, led by George Thomson, Dr D.G. Jones and 'Captain' Edward Browne. The association focused its attention on the 30 shillings monthly licence fee miners were required to pay to the government. They drew up a petition outlining digger grievances and called for a reduced licence fee, improved law and order, the right to vote and the right to buy land. The petition was signed by diggers at Bendigo, Ballarat, Castlemaine, McIvor (Heathcote), Mount Alexander (Harcourt) and other diggings. The 13 metre long petition was presented to Lieutenant-Governor Charles La Trobe in Melbourne on the 01 August 1853, but their call for a reduction in monthly licence fees and land reform for diggers was rejected. The diggers dissatisfaction erupted into the Red Ribbon Rebellion where agitators wore red ribbons on their hats symbolising their defiance of the law and prohibitive licence fees.

DEATH OF MR. GEO. ASPINALL, J.P.
Another gap has been caused in the rapidly thinning ranks of the old Bendigonians, Mr. George Aspinall, who during his career on Bendigo has been a useful citizen in a variety of ways, having died at his residence, in View-street, last evening. His death was not unexpected, all hope of his recovery from the malady which resulted in his death—chest disease— having been given up some time since. Mr. Aspinall was born at Whitworth, near Rochdale in Lancashire, in 1831, and was consequently 52 years of age at the time of his death. His father was manager of a cotton manufactory, and Mr Aspinall was then engaged in the counting office. Mr. Aspinall left home in 1852, and came to Victoria in the ship "True Briton," which was trading between Liverpool and Melbourne. He came to Sandhurst in 1853 along with a party known as "Hux and Co." A portion of this party went digging, and Messrs. Aspinall and Hux started a butcher's establishment near the old escort barracks, Sheepshead, near where the Red, White and Blue mine is situated. This party was broken up after a time, and Mr. Aspinall started a butcher's establishment in Camp-street on the present site of Webb's tailoring establishment, next the Shamrock Hotel. He became acquainted with Mr. Robert Strickland, the present coroner, in 1854, and in the first week in February 1855 they commenced business together as butchers in Bridge-street. The partnership was very successful, and was subsequently joined by Mr. Richard Williamson, who was then carrying on business in View Point. They established another shop where the ironmongery portion of the Lyceum Store is now carried on. This place had previously been Scherff's store,and was connected with the Lyceum Theatre, which was built by Mr. J.H. Abbott. The firm had also a cattle yard in the vicinity of the present abattoirs, and carried on a large wholesale cattle trade, with a depot paddock at Harney's Barnedown station near Clare Inn. The business was remarkably successful, and in 1859 Mr. Aspinall took a trip home. He was supposed to have gone home by the "Royal Charter," which was lost at sea, but it after-wards transpired that he had not gone home by that vessel. Mr. Williamson retired from the firm about this time. When he was at home, Mr. Aspinall was married and returned to the colony, bringing his wife with him, in May, 1860, by the ship Norfolk. The firm of Aspinall and Strickland continued to conduct the business until August 1862, when Mr. Strick-land was returned to Parliament in the place of Mr. W. D. C. Denovan. Mr. Aspinall continued to conduct the business alone for about five years, and in 1867 he relinquished it in favor of his nephew, Mr. Timothy Nelson. Mr. Aspinall entered the council in 1868, and was re-elected for the Barkly Ward on every occasion till 1880, when he was defeated by Cr. Bailes. He twice occupied the position of Mayor during his long and serviceable tenure of office as councillor, and was for many years a justice of the peace. Mr. Aspinall was a very energetic councillor, and exhibited very great aptitude in financial matters. He was always a careful councillor and was guided by thorough business habits, acquired by private experience, in discharging the duties of his position. His absence from the council has been much felt.
For some time he was on the Hospital Board of Management, and for many years was president of the Asylum Board. He was one of the direc-tors of the Permanent Building Society, and he and several other gentlemen subsequently formed themselves into the City Discount Com-pany, of which he was managing director. He was also a local director, along with Mr. R. Burrowes, M.L.A., and Mr. Vahland, of the National Insurance Company, of which Mr. Von der Heyde is secretary. He was the chairman of directors of the Royal Princess Theatre Company, and was one of the originators of the Easter Fairs, which have resulted so satisfactorily for the charitable institutions. During the last nine or ten months Mr. Aspinall has suffered very much from chest disease, which presented a serious aspect during the last three months, and since Christmas he has been seldom able to leave his house. He has not been confined to his bed, but it was apparent that he was gradually wasting away, and about a week ago Dr. James Boyd, who has been his constant medical attendant, said that his death was only a matter of a few days. Yesterday he did not get up as was his habit, and he sank gradually, and died at twenty-five minutes to six o'clock last evening. Mr. Aspinall was a kind and affec-tionate husband and father, and leaves a widow and seven children, three sons and four daugh-ters, to mourn their loss. The eldest son, Herbert, who is 22 years of age, occupies a good position as clerk in the Savings Bank, and the youngest member of the family is six years of age.
The funeral will take place at 11' o'clock on Monday morning.[2]