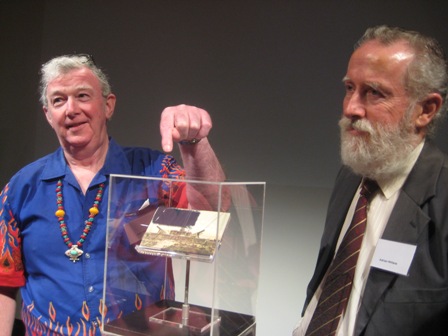 John Millane (left) and Adrian Millane with the fragment of the Eureka Flag that was presented to their ancestor by Peter Lalor, 2013 Photograph: Clare Gervasoni

Francis William Joseph Breen Hanlon was a relative and friend of Peter Lalor.

Peter Lalor presented Francis Hanlon with a small piece of the Eureka Flag.

A piece of the Eureka flag, handed down through the generations after first being given to Francis Hanlon by his cousin Peter Lalor was unveiled at the Museum of Australian Democracy at Eureka on 03 December 2013. It will remain on loan at the centre for two years.[1]