The organised collection lists and invited designs for a memorial.[2]

On 25 July 1884 the committee resolved to inspect the Eureka Stockade Reserve and determine the site for the proposed memorial, and invite the Ballarat East Council to participate. The committee met at Joseph's Hotel, Eureka Street as a diversity of opinion exists regarding the position once occupied by the stockade.[3] 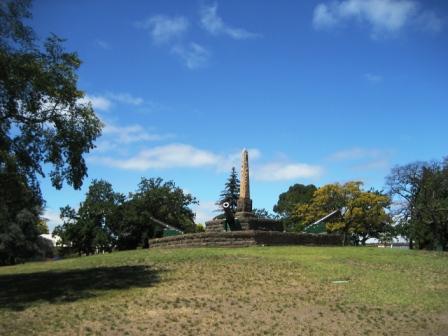 The great interest taken in everything concerning the Eureka Stockade was evident yesterday, when several hundred persons gathered at the site at Eureka Street, Ballarat East, for the purpose of fixing the exact spot where the fight took place, on which the monument will shortly be erected. Besides a large number of Stockaders and old identities, there were present Messrs James and Russell, M.L.A., Mayor Ferguson and Councillors Lewis, Morrison, Williams, Roff, Gregory, Walker, Scott, Elsworth, and Messrs Bechervaise, J.N. Wilson, H. Josephs, Lester, C. Dyte, D. Turpie and Mr H.A. King, the architect. Mr James Esmond, the gold discoverer, who looked very well, was amongst the Stockaders present. It soon became apparent that great difficulty was in the way of setting down the exact boundaries of the Stockade, which measured about 400 feet in diameter, This was on account of the great change in the surface, the neighbourhood having undergone considerable change in the course of thirty years. Each knot of Stockaders was of a different opinion, and the scenes were rather amusing, as each one stuck stubbornly to his opinion. the memorial committee recognised the difficulty, but had not foreseen anything of the sort, no arrangement had been made to take evidence on the point. Ultimately Councillor Roff exclaimed - "Let us make a ring and get the different opinions." This idea was carried out. Mr James, M.L.A. said that he had come to the conclusion that the Stockade was to the north of the Eureka Street rise. there were cries of 'No, No." Nearly all the remaining diggers were of the opinion that the fight took place about 200 yards to the north of Eureka Street, and ultimately the spot which is about 200 yards to the east of what was generally accepted as the site, was set down as the centre of the Stockade. Mayor Ferguson duly made the announcement, which was received with cheers. The sport selected, even if not actually the exact site of the Stockade, was undoubtedly the most suitable for the monument, which will probably be unveiled on the 30th anniversary in December next. About 50 pounds is still required for the completion of the monument. it is not generally known that 12 acres in the neighbourhood of the Stockade has been declared a reserve, The whole, or a portion of this reserve, will shortly be fenced in by the Town Council.