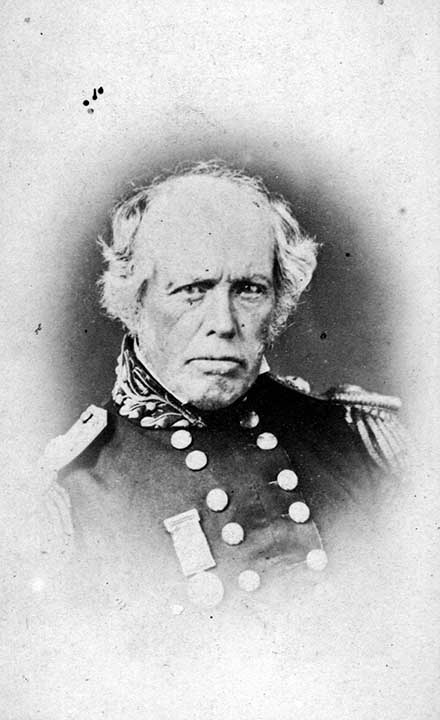 Edward Macarthur was born in 1789. He isvited Australia with his parents when he was a child and spent his boyhood at Elizabeth Farm, Parramatta. After returning to England for his education, he went to New South Wales as agent of T. M. Macqueen in 1824. After campaigns in Europe and Ireland he was posted to Sydney as deputy adjutant-general. Later in his career he was promoted to colonel and accompanied the commander-in-chief, Major -General Sir Robert Nickle to Eureka where they negotiated with the miners at the Eureka Stockade and withdrew martial law. In 1858 Macarthur chaired a royal commission on the defences of the colony. Macarthur was married late in life to Sarah Neill. They had no children. He died in 1872 in London survived by his wife.[1]

Head Quarters, Ballarat
6th December 1854
GENERAL ORDER
Major General Sir Robert Nickle, K.H., Commanding the FOrces in the Australian Colonies, announces to Her Majesty's subjects, Civil and Military, that, acting under the authority of His Excellency, the Lieutenant Governor of Victoria, He has assumed command of the force at Ballarat, to restore confidence and to preserve the lives and property of all peaceful persons.
The inhabitants are recommended to pursue their ordinary lawful avocations as heretofore.
Military Law having this day proclained, the Major General directs as follows:
1. Stores of every kind may be brought into the District, exept Arms and Ammunition; and any conveyance containing Arms and Military Stores will be confiscated, and the persons in charge will be tried by a general Court Martial.
2. All persons in whose possession or on whose premises Arms of Ammunition may be found after Twelve o'clock on the day of Saturday, the Ninth of December, will be tried by a general Court Martial.
3. All persons having Arms and Ammunition in their possession, are hereby required to deliver them, by that time, to a Storekeeper at the Camp, appointed to receive, and register, and to give a receipt for the same.
4. Should any insult or violence be offered to any Soldier, or Policeman, or any recognised authority, the offending persons will be tried by General Court Martial.
5. Should a shot be fired on the Camp, or on any of the above-named authorities, from teh neighbourhood of any Tent, it will be immediately burned down, unless the occupants give such information as shall lead to the conviction of the perpetrators of such outrage, who will, in every case, be tried by a general Court Martial.
6. Any persons found lighting a fire, having an appearance of a signal fire, will be tried by a general Court Martial.
7. Officers commanding the Force, whether Civil or Military, now serving withinf this District, will receive orders through the medium of the Deputy Adjutant General, and will in like manner make their reports for Sir Robert Nickle's consideration.
8. Public Meetings are prohibited, except with the premission of the Major General.
(By Command,)
Edward Macarthur,
Colonel,
Deputy Adjutant General
Printed at the "Times" Office, Bakery Hill