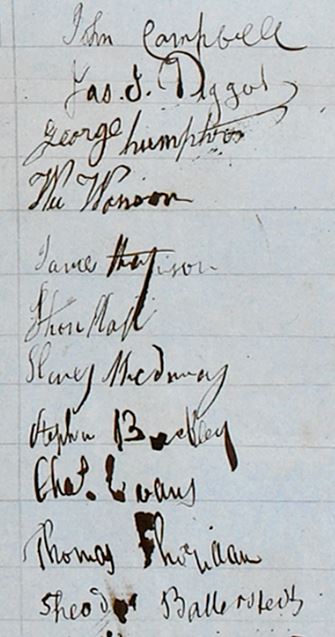 Charles James Evans was born in 1827 at Ironbridge, Shropshire England,[1] the son of Charles James Evans and Jane (Bennett). His father had died some time prior to the 1841 Census which showed his older brother George Basnett Evans aged 16 years working in a coal mine, and Charles 14 years working as an agricultural labourer. According to the 1851 British Census Charles Evans 24 years, was a servant, living with George Morgan, a draper and Sarah Morgan his wife, in Staffordshire. 1851 saw George Evans, now 26 years, an assistant to his milliner mother Jane, and John his younger brother, now 22 years of age, in business as a draper in an establishment in New Street, Wellington.

Many men with the name "Charles Evans" arrived in Victoria in the early 1850s so it is difficult to ascertain when Evans emigrated. One possibility is the Charles Evans who arrived on the Welllington or Duke of Wellington in January 1853.

George Evans and Charles Evans signed the Benden Sherritt Hassell compensation case for his claim of injuries on 28 November 1854 when the 12th Regiment marched into Ballarat past the Eureka Lead.[2] Charles Evans could also have signed the Bendigo Goldfields Petition.

In July 1855, with Wheeler and Fletcher, Evans started the Ballarat Trumpeter. The printing office was on the Main Road, not far from the Eastern Market. It was published tri-weekly under the joint ownership and lasted about 12 months being the nucleus for the Ballarat Standard. [3]

Fletcher and Evans signed a Petition of householders of Ballaarat requesting the establishment of a Municipality in 1855.