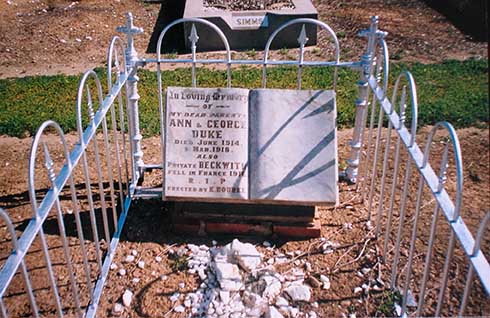 Headstone of Ann and George Duke in the Echuca Cemetery.

Ann Gaynor was born on 21 November 1838 at County Meath, Ireland. She was the daughter of James Gaynor and Bridget Powderly - storekeepers and carriers in Bendigo then Woodend. Anne travelled to Australia on the William Sharples with her parents, arriving in Sydney in 1842. The family settled in Sydney for two years before travelling to Melbourne in 1844. They lived in Lonsdale Street, playing around “Collingwood Green” near St. Francis church. Anne’s brothers carried goods between Ballarat and Melbourne, and her parents kept a store at the Bendigo diggings. Anne married George Duke at Chewton, near Castlemaine, in March 1854, and they moved to Ballarat.[1]

She died 21 June 1914, while staying at the home of her daughter, Mary Johnson. Anne Duke is buried in Echuca Cemetery. [2]

Anne Duke had a tent inside the Eureka Stockade.[3] She is said to have been one of the women who sewed the stars on the Eureka Flag, and that she was inside the Eureka Stockade during the Eureka battle. Anne’s brother Thomas Gaynor is said to have helped Peter Lalor after the battle. It was said Anne hid with Mrs Parker behind the logs around the tent, and heard the bullets striking the utensils in the tent. The clothes in Ann Duke's tent were riddled with shot. [4]

Ann and her husband fled after the Eureka Stockade and Ann gave birth under a spring cart on the road to Bendigo a few days later. The family later settled at Woodend, where most of here twelve children were born. [5]

When Ann Duke's parents, James and Bridget Gaynor, arrived in Australia they left Melbourne to work on the Mount Franklin Aboriginal Station for the Aborignines Protection Society.[6]

The many friends of Mrs. Wm. Beckwith, of Undera, will regret to hear of the death of her mother, Mrs. Ann Duke, of Echuca. Mrs. Duke was a colonist of 67 years and formerly lived at Woodend, where she was very highly-respected. She was one of the few women who were pr sent at the fight between the miners and the Government, troops in the Eureka Stockade at Ballarat.[7]