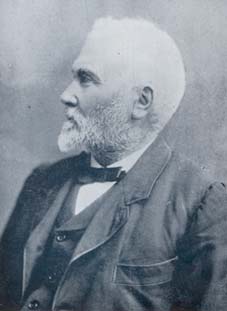 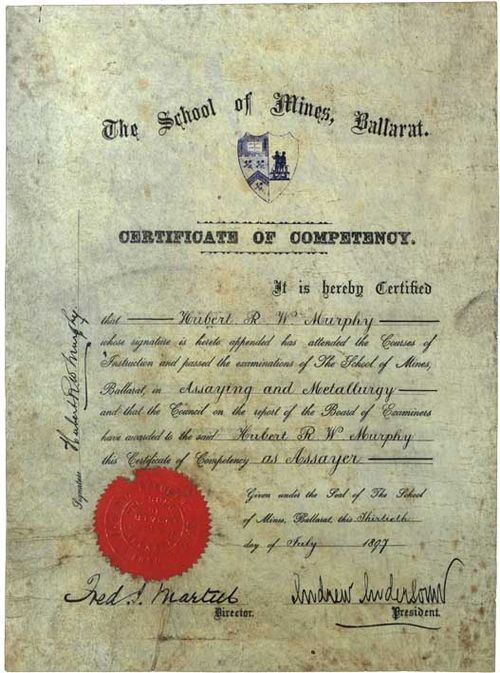 Andrew Anderson was born in Scotland in 1832, and he arrived in Australia in 1851 on the Morgapor, and Ballarat in 1855, establishing a boot business in Main Road, Ballarat East.

Anderson died at the age of 78 on 10 August 1910, and is buried at Ballaarat New Cemetery.

Andrew Anderson signed the 1853 Bendigo Goldfields Petition. Agitation of the Victorian goldfields started with the Forest Creek Monster Meeting in 1851, but what became known as the Red Ribbon Movement was centred around the Bendigo goldfields in 1853. The Anti-Gold License Association was formed at Bendigo in June 1853, led by George Thomson, Dr D.G. Jones and 'Captain' Edward Browne. The association focused its attention on the 30 shillings monthly licence fee miners were required to pay to the government. They drew up a petition outlining digger grievances and called for a reduced licence fee, improved law and order, the right to vote and the right to buy land. The petition was signed by diggers at Bendigo, Ballarat, Castlemaine, McIvor (Heathcote), Mount Alexander (Harcourt) and other diggings. The 13 metre long petition was presented to Lieutenant-Governor Charles La Trobe in Melbourne on the 01 August 1853, but their call for a reduction in monthly licence fees and land reform for diggers was rejected. The diggers dissatisfaction erupted into the Red Ribbon Rebellion where agitators wore red ribbons on their hats symbolising their defiance of the law and prohibitive licence fees.

DEATH OF MR ANDREW ANDERSON.
A PROMINENT PUBLIC MAN.
One of Ballarat's best known public men passed away yesterday, in the person of Mr Andrew Anderson, who died at his residence, Wendouree parade. Mr Anderson, who was 78 years of age, was a native of Scotland, and was educated at a High School in Edinburgh. He came to Australia in 1851, and to Ballarat soon after. Anderson opened business, as a boot warehouseman in Bridge street, and after doing a sound business there established the tannery in Sturt Street west, with which he was associated till his death. Mr Anderson was a man with plenty of energy, and the desire to see the city of his adoption go ahead. With this view he associated himself with many local public institutions. He was in his early years here a member of the Ballarat Town Council, and was also a trustee of the Ballarat Fire Brigade. When the Ballarat Water Commission was formed Mr Anderson was appointed chairman. He always took a keen interest in the work of the Commission, and his steadfast advocacy of the policy of tree planting at the reserves gave the commission in later years a fine source of income. When the Ballarat Gas Company was instituted Mr Anderson took up a substantial percentage of the shares, and he was for many years chairman of the board. He also occupied a similar position at the head of affairs of the Ballarat Banking Company. The question of education was one which always aroused the interest of Mr Anderson, and he became connected with the School of Mines in the struggling days of that institution. He was subsequently appointed president of the school council, a position he held till his death. It was in no small measure due to Mr Anderson’s business acumen that the school made such progress. He became intimately associated with the Ballarat Hospital at an early stage in the development of that institution, and was for many years a committeeman. He was one of the few optimists in 1859 who thought Ballarat could afford a Mechanics' Institute. He helped materially in the foundation of that useful institute, and was one of the first vice-presidents appointed. When the news of his death became public the flags on the City Hall, City and Town Fire Brigades, and Hospital were flown at half-mast. It was rather a sad coincidence that the new flagpole at the School of Mines should have been brought into requisition yesterday for the first time, when the flag was hoisted at half-mast in memory of the deceased president. The students will attend the funeral today in a body, while the professional and other staffs will also be present. The deceased leaves one son, Mr Gilbert Anderson, and two daughters, one of whom is Mrs W. A. Tweedie. His wife died about 17 years ago, and his brother predeceased him by a few months. The cause of death was heart failure supervening on bronchitis. The funeral will leave his late residence, Wendouree Parade, at 3 p.m. today for the place of interment, the New Cemetery.[2]