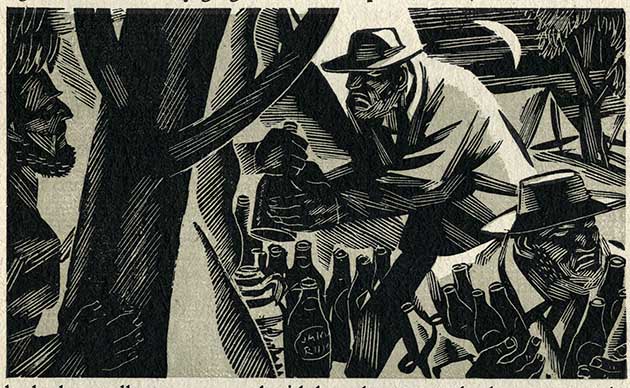 Ballarat 8th March 1852
Sir,
In transmitting the enclosed sections from the Gold Workings, I have the honor to state for the information of His Excellency the Lieut. Governor, that during the past week a considerable number of persons have left the diggings in this neighbourhood and are reported to have gone to the Ovens. The reasons assigned to their leaving are first that at the "Eureka" numbers have sunk deep holes and have not succeeded in obtaining any gold, and secondly the water their is beginning to fail.
The Gold at the "Eureka" Diggins appears to be very irregularly deposited and lays in large pockets or masses, which will account for the great quantity obtained by some of the more fortunate miners, while many others have obtained none. I consider the population today to be three thousand five hundred souls.
New diggins are reported to have been discovered about two miles from Boningyong near the "Leigh" and are said to be very rich, I intend searching for them during the early part of this month.
2nd The Escort conveys 18,075 ounces of gold today from this station, and as the one cart is insufficient to take it I have been obliged to hire a second light cart on the Diggins,
3rd Generally speaking the population is pretty orderly, a detachment of six foot police men arrived here from Mount Alexander on Wednesday last, and have been actively employed since that time in discovering the sly Grog Tents,
4th No disturbances worthy of notice have occurred during the week and the people are generally speaking healthy.
5th After the close of the present week when I shall have had opportunity of going through the districts, I anticipate the honour of having enabled to furnish a more complete and formal report of the whole of the Diggins in the neighbourhood of Ballarat and Boninyong.
I have the honor to be
Sir
Your Most Obedt Servant
Alfred Eyre
Actg P.M.[2]