Michael Bolger was born in Kings County, Ireland. [1] He arrived in Ballarat shortly after the discovery of gold in 1851, mining first at Golden Point. He was present at the first Catholic Mass at Ballarat.[2]

Mr. Michael Bolger, a colonist of 6O years, died at Yarram(V.), on Sunday evening. He was a gold-digger in the stirring days of early Ballarat and Bendigo, and was engaged in the stubborn, fight of the miner's for their rights which culminated in the Eureka Stock- ade. After the gold fever wore off. Mr. Bolger turned his energies to pastoral pursuits, and settled permanently in Gippsland. He had resided in Yar- ram for 20 years prior to his death. Deceased was a native of King's County, Ireland, and leaves a widow and family of nine sons and, daughters, whose heights range from 6ft. to 6ft. 6 in.[4] 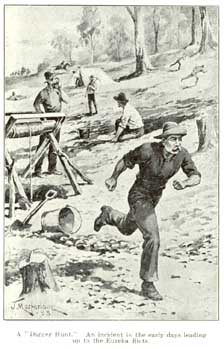 THE EUREKA STOCKADE. - TO THE EDITOR OF THE ARGUS.
Sir, – My friend Mr. Lavater makes my letter of the 17th inst. the occasion of some warmth. The name Dr. Ewes was a misprint for Dewes or D'Ewes. I never knew before that this officer served at Geelong. The police officer Armstrong, mentioned by Mr. Lavater, left the public service 15 months before the outbreak; and as early as January or February, 1854, the police – I am speaking of those at Ballarat only – were forbidden to carry any weapon but their baton. What happened at Smythsdale in March, 1854 (see Mr. Cane's letter), I cannot say.
Mr. Bolger, another correspondent, says that at the last "digger hunt" the police carried arms, but he does not explain that this was the time when the diggers were nightly "sniping" the Goveminent camp as admitted by Mr. Lavater, and while they held in forced imprisonment Commissioner Amos, "one of the beloved of the diggers" according to the same authority. The Eureka outbreak from every point of view, was a stupendous folly. It would be well if the whole affair could be forgotten. —
Yours, &c., J. SADLEIR, June 23.[5]

TO THE EDITOR OF THE ARGUS. - Sir-I think that any person knowing Mr. Oddie would know he would not exaggerate about the Eureka Stockade. I wish to inform Mr. Sadlier I am the person who conveyed the bodies of Gittens and O'Neill to Ballarat Cemetery on that memorable 3rd of December, 1854, and on the body of one of those there were 10 wounds. I will let the public of the present day judge for themselves whether that was butchery or not.
Yours. &c. M. BOLGER.[6]