Signature of Ferdinand Ballerstedt from the 1853 Bendigo Goldfields Petition

Signature of Theodore Ballerstedt from the 1853 Bendigo Goldfields Petition 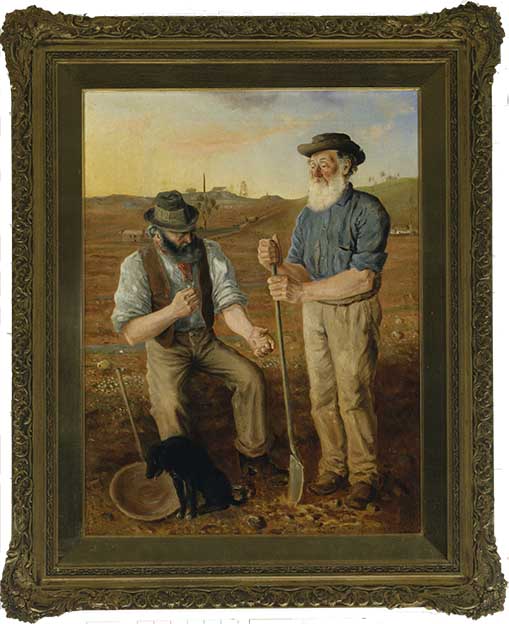 Christopher and his son Theodore Ballerstedt were from Magdeburg, Germany. They were some of the earliest successful reef miners on the Bendigo goldfields. They bought the Fortuna Villa site in Bendigo, and built a quartz-crushing mill and a home. Theodore Ballerstedt started building the house known as Fortuna in the mid-1850’s. The property was then sold to George Lansell.[1]

Bendigo architect Theodore Ballersted signed the 1853 Bendigo Goldfields Petition. Agitation of the Victorian goldfields started with the Forest Creek Monster Meeting in 1851, but what became known as the Red Ribbon Movement was centred around the Bendigo goldfields in 1853. The Anti-Gold License Association was formed at Bendigo in June 1853, led by George Thomson, Dr D.G. Jones and 'Captain' Edward Browne. The association focused its attention on the 30 shillings monthly licence fee miners were required to pay to the government. They drew up a petition outlining digger grievances and called for a reduced licence fee, improved law and order, the right to vote and the right to buy land. The petition was signed by diggers at Bendigo, Ballarat, Castlemaine, McIvor (Heathcote), Mount Alexander (Harcourt) and other diggings. The 13 metre long petition was presented to Lieutenant-Governor Charles La Trobe in Melbourne on the 01 August 1853, but their call for a reduction in monthly licence fees and land reform for diggers was rejected. The diggers dissatisfaction erupted into the Red Ribbon Rebellion where agitators wore red ribbons on their hats symbolising their defiance of the law and prohibitive licence fees.

Christopher Ballerstedt died in 1869. Two years later his son Theodore and his wife sold the Ballerstedt assets to George Lansell and returned to Magdeburg, Germany. [3]

Johann Gottfried Tobias Christopher (Christopher) Ballerstedt was drafted into the Prussian army commanded by the field marshal Gebhard Leberecht von Blücher. He fought at the Battle of Waterloo in 1815 when Napoleon was finally defeated. With his son Theodore he travelled to the Californian goldfields in the late 1840s, but had little luck there. Hearing of the discoveries in Australia, they travelled on to Sydney in 1852, and made their way overland to various goldfields, eventually arriving at the Sandhurst (Bendigo) diggings with their belongings in a wheelbarrow.[4]