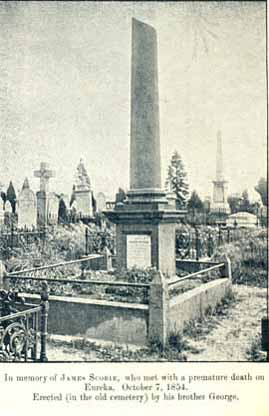 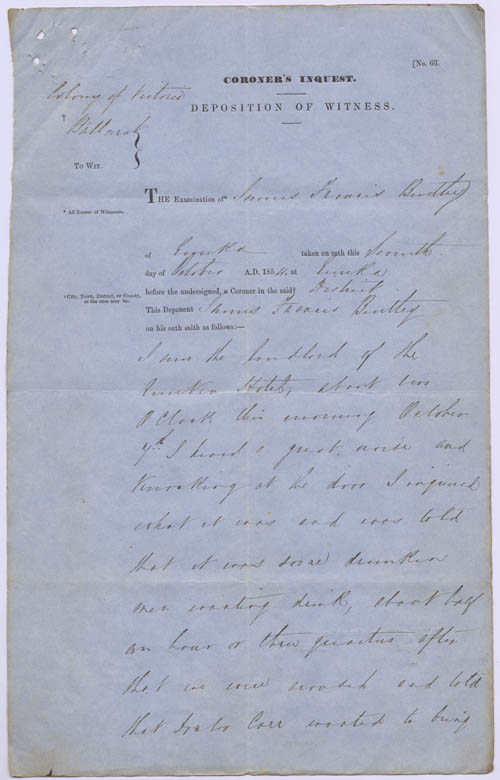 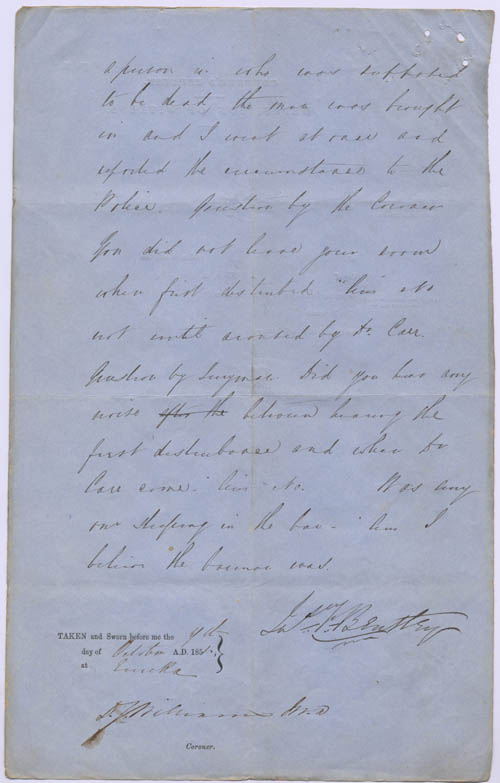 On 07 October 1854 two recently reunited Scotsmen, James Scobie and Peter Martin, were out celebrating. Wanting another during they knocked on the door of the Eureka Hotel after opening hours. Their request for another drink was refused, and after a scuffle James Scobie was struck on the head with a shovel, and Peter Martin was kicked to the ground. James Scobie died as the result of injuries received. Dr James Stewart performed an inquest into Scobie's death with an open verdict returned, even though most believed James Bentley had killed Scobie.

...An inquest was held by a magistrate named Dewes, who was suspected of being under an obligation to Bentley, and believed to be what subsequent official investigation proved, a corrupt and unreliable officer. Instead of committing Bentley for trial, Dewes acquitted him. One of the commissioners (Johnston) was not satisfied with the inquiry, and forwarded his notes to headquarters. The diggers were enraged at so flagrant a miscarriage of justice. Bentley had a bad record, and his house a bad reputation. The incident served to increase the tension between the diggers and the authorities.[1]

27/10/54
Ballarat 23rd Oct 1854
To His Excellency Sir Charles Hotham K.C.B. Lieutenant Governor of the Colony of Victoria
We the committee for the prosecution of the investigation into the death of the late James Scobie, duly appointed at a public meeting, held here on the 17th inst do beg to forward to your Excellency the enclosed Petition.
Your Excellency having anticipated the object of the Petition, we desiring as much as possible to allay the excitement at present existing on these diggings have thought it unnecessary and impolitic to have signatures attached to the Petition.
We beg to tender our sincere thanks to your Excellency for the promptitude and vigour with which the case has been taken up by your Excellency’s Government, and which is rapidly restoring the confidence of this community in that due administration of the law, which is necessary to the preservation of society.
In any investigation which your Excellency may be pleased to institute into this matter, we feel confident that the conduct of the magistrates, and especially that of the coroner, will appear to your Excellency in its true light.
We beg to subscribe ourselves your Excellency’s most devoted and obedient servants-
James R. Thomson Chairman
Peter Lalor Secretary
Thomas P. Wanliss Treasurer
John Weightman Gray
William Corkhill
Alexander McP Grant
Archibald Carmichael[2]

THE BALLARAT MURDER
At the Criminal Sittings of the Supreme Court on Saturday, James Francis Bentley, Catherine Bentley, his wife, John Farrell, and William Henry Hance, were charged with the murder of James Scobie, at Ballarat, on the 7th of October last. The prisoners pleaded Not Guilty. Mr Michie appeared for Farrell, Mr Ireland defended the Bentleys, and Mr Whipham appeared for Hance. The Attorney General, with whom was the Solicitor General conducted the case for the Crown. The facts attendant upon the death of Scobie were lengthily detailed in evidence, but they may be compressed into a narrow compass. On the night of Friday, Oct. 6, deceased, in company with his mate, Peter Martin, called at Bentley’s Eureka Hotel, for the purpose of procuring something to drink. Just as they were leaving a window was broken, and they had not proceeded more than150 yards from the house when they were overtaken by the prisoners, who were under the impression that it was they who had caused the damage. They were both knocked down; Farrell struck deceased with his fist, and kicked him when upon the ground. Hance also kicked him. Bentley was there with a spade in his hand, but it does not appear that any one saw him strike a blow. He said, however that “the sweep was properly served.” A post mortem examination disclosed the injuries deceased had received. They were principally bruises on the head, but none sufficiently severe to be considered direct cause of death. Dr John Alfred Carr, the medical man who made the post-mortem said - There was a very strong odour of spirits from the stomach, which was frightfully loaded with ... [3]