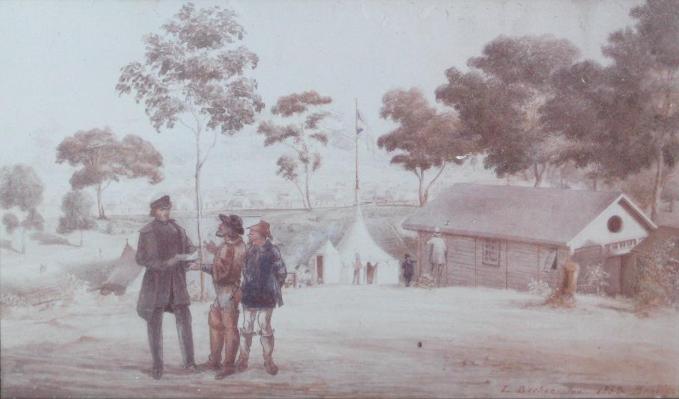 Gold was discovered by Margaret Kennedy and Mrs Farrell in the Bendigo Creek at Golden Point, near today's Maple Street. Their dicovery marked the beginning of a very successful goldfield.

In 1853, at the height of the gold rush, protests were made to Victoria's Colonial Government, with agitation on every goldfield in Victoria. In Bendigo the Red Ribbon Rebellion resulted in over 23,000 signatures on a petition known as the Bendigo Miners' Petition. 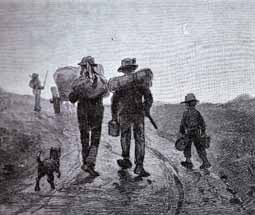 SCRAPS FROM THE VICTORIA GOLD FIELDS. (From our own Correspondent.) Bendigo, December 8, 1853.

THE grand initiation of the second agitation against the license tax, and for enfranchising the gold diggers, took place on Saturday. The locale was in the rear of the Digger's Advocate Office, Golden Square, on some rising ground, Dr. Owens (John Owens), late of the Ovens, was in the chair. The speakers were, Drs. M'Donald and Wall, Mr. William Edmonds, storekeeper, Mr. Donovan, storekeeper, and one or two new chums. The mantle of the late agitators does not seem to have settled on the new aspirants. There was wanting that vigour of speech, and happy off-hand manner which characterised the defunct agitators' speeches, and which told with so much effect on the believing digger. There might too be an absence, to a great ex- tent, of the cause of complaint which existed some few months back. Certainly the new Gold Fields Bill falls very far short of what was ex- pected from the Report of the Select Com- mittee. The £50 annual license for store- keepers has given great offence to thousands of the small dealers on the various diggings; some of the more influential of this class, of course, feel pleased at this clause, because they think it will be the means of shutting up a large pro- portion of the retailers of merchandise, and thus afford the former a monopoly. This part of the enactment is certainly highly objectionable, and will press very unequally on those who are thus taxed; but then the digger has to pay, and it is this that the new agitators are harping on. The premium for taking out yearly licenses, and giving the franchise to those who do so, is another bungling piece of business. The Go- vernment first say to the digger, "you have great privileges in being permitted to live in this fine country, and you must pay for them; if you stay only one month you shall pay 20s., but if you will be good enough to stay twelve months, you shall only pay £8 per annum." Here is an affirmative and a negative in the same breath. The Act is full of pains and penalties, which, coupled with the manner in which it was smuggled through the Council, affords ample room for the portion of antagonism taken by the diggings' orators. At the meeting on Saturday there were about 3000 persons. The resolutions were con- demnatory of the Bill (or rather "Act now.,) It was also determined that there should be an election of representatives for the Bendigo, with liberty for the other gold fields to join, who are to sit in congress on the wants of the digging community. There are to be seven returned for Bendigo, and the election is by ballot on Saturday week next. The parties re- turned are to be the bona fide representatives for twelve months from the date of their election. DIVISION IN THE CAMP.—There are rumours of great dissatisfaction existing in the minds of several of the Government officers at Bendigo, on the subject of the new Act. Mr. Panton, the resident commissioner, with two or three others, it is said, have resigned. It is supposed that the clause in the Act providing that a commis- sioner should go round with the police to search for unlicensed diggers and occupiers of crown lands, is the chief cause of the commotion.[1]