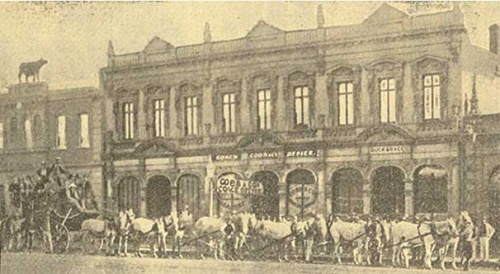 The Great Leviathan drawn by the famous 12 greys in Malop Street, Geelong, where for some years the office of Cobb & Co. was situated. The passengers were members of Stephenson's English Eleven, 1862. Geelong Advertiser, 08 July 1955. 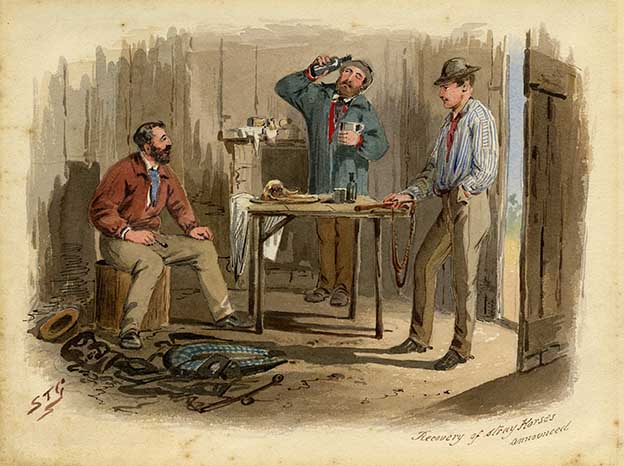 Ferguson was born in Ohio, United States of America, in 1832. When he was 18 he went to the California gold-fields, where he spent two years. He arrived in Sydney in July 1852 aboard the Don Juan from San Fransisco, then sailed on the Shusan to Melbourne. He spent time on the diggings at Ballarat, Ovens, Bendigo, Beechworth and McIvor.[1]

Fergusen built Ballarat’s Adelphi Theatre, and worked for Cobb and Co.[2] He was a famed coach-driver and horse-tamer.[3]

William Murrell, corporal of the 40th, was at the Eureka Stockade on the 03 December 1854 and saw Ferguson twenty years inside the stockade. Murrell ordered Ferguson to join the other prisoners. [5] Ferguson described himself as having been seized on his way to visit a friend, and detained by the rioters against his will. [6]

Ferguson was a member of the Independent California Rangers who witnessed the shooting of Captain Henry Wise during the Eureka Stockade battle. In 1887 he gave an account of the Eureka riot. He, and John Josephs, who was charged with High Treason, were the only Americans taken prisoner. Ferguso was chained to Henry Seekamp at gaol. Dr Kenworthy obtained Ferguson's release. Raffaello Carboni spoke well of him. Later Ferguson said he had the foresight to dispose of his colt revolver and bowie knife before surrendering. He also said that Nichols and Kenworthy had supplied a change of clothes to make identification more difficult.[7]

Ferguson was appointed foreman to the Burke and Wills expedition on a salary of £200 per annum. On the 18 August 1860, Brahe signed the Memorandum of Agreement at the Royal Society of Victoria. Ferguson was discharged on 18 September 1860 at Balranald, Victoria, and then allegedly challenged Robert O'Hara Burke to a duel. Burke wrote cheque No. 12 to Ferguson on 18 September 1860 for £16 13s 4d for one months pay. Ferguson sued the Victorian Exploration Committee for wrongful dismissal and was awarded £183 damages.[8]

Ferguson joined the goldrush to New Zealand, and returned to the USA in the 1880s, living in the mid-west. In 1887 he gave an account of the Eureka encounter.[9]

Ferguson, Charles D. The Experiences Of A Forty Niner During Thirty Four Years Residence In California and Australia.