Difference between revisions of "John Hanrahan" 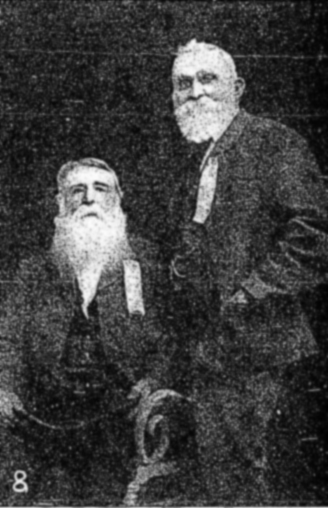 Edmund Mahoney and John Hanrahan were their blue 'Eureka Stockade' ribbon at the 50th anniversay of the Eureka Stockade Uprising, 1904. The Leader, 10 December 1904

Mr. John Hanrahan, of Warragul, describes himself as one of the survivors, and has sent in an application for a pass. In his letter he says: — "I was there from the March pre vious (the rebellion took place in December 1854), and lived with my parents, brothers and sister within 20 chains of the barricade that the diggers threw up to protect themselves. I had two cousins wounded there. One had two bullets in his thigh, and was killed afterwards at the No. 2 shaft of the Band of Hope by being pulled into the poppet heads. The other had a bayonet wound between the two shoulders and a cut under the left breast. He died at Collingwood two years ago of miners' disease. . . . At 10 o'clock on Sunday morning (December, 1854) I went with my sister and female cousin to look for her brother, who was wounded and taken by the police. I then counted ten or twelve dead men, charred after being killed through being laid, in or close to the stores when they were set on fire. I went with another boy to fetch back Father Smith's horse after conveying Mr. Peter Lalor out to Warrenheip when he lost his arm. I mention these incidents to convince you that I was there. I cannot refer you to any prominent men who knew me then, as they are all dead."[2]