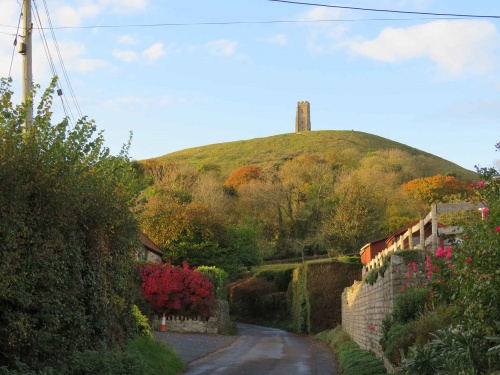 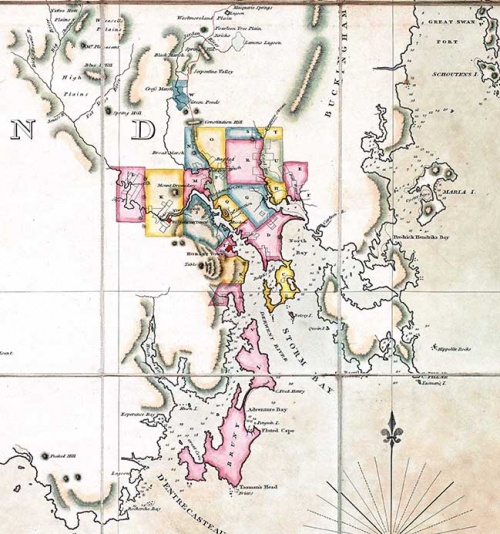 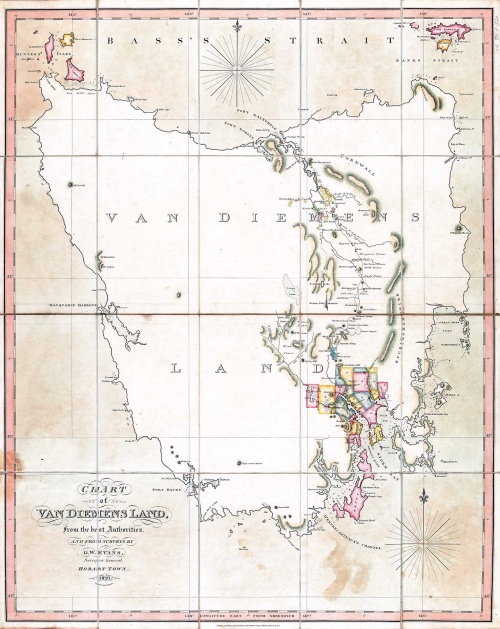 It has been reported that Margaret, the daughter of Francis Doveton was buried in an unmarked grave at St Kilda Cemetery. She was the daughter of Lieutenant Doveton of the 51st Regiment Queens Own, the first goldfields commissioner in Victoria who played a leading role in the conflict at Eureka Stockade.[5] 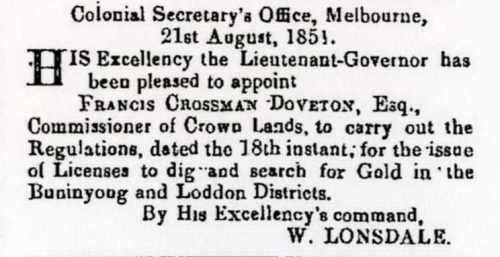 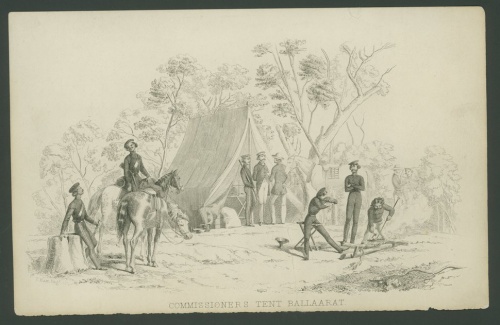 On 21 August 1851 he was appointed first Gold Commissioner in Victoria. William Lonsdale advertised from the Colonial Secretary's Office, Melbourne, that on 21st August, 1851 "His Excellency the Lieutenant-Governor has been pleased to appoint Francis Crossman Doveton, Esq., Commissioner of Crown Lands, to carry out the Regulations, dated the 18th instant; for the issue of Licenses [sic] to dig and search for Gold in the Buninyong and Loddon Districts. By His Excellency's command" signed W. Lonsdale.[6] Doveton was on the first staff at Mount Alexander (Castlemaine) Goldfields. Doveton arrived at Ballarat, along with Assistant Commissioner David Armstrong, on 19 September 1851 with a team of troopers and assisted by Captain Dana and his police troopers. They began to issue the first licences on 21 September 1851, with the first confrontation against the licence occurring the day before on 20 September 1851. The licence system caused much resentment, and Doveton is quoted as saying that he did not make the law but was sent to administer it.[7]

On the 21st instant a magisterial enquiry was held by F. C. Doveton, Esq., P.M., on the body of William Twyford, and infant of 3 or 4 months of age, the son of one Thomas Twyford, gold miner, living on the Old Race-course, Hepburn, who from the evidence adduced, arrived at the conclusion "That William Twyford came by his death from the effects of spasmodic convulsions." - 31 Janurary, 1858. [8]

On 18 December 1889 the Victoria Police Gazette reported that fees had been received by the Government for an Auctioneer's Licence for F. Doveton of Melbourne. [9]

AN OLD COLONIST.
Mr. Francis Crossman Doveton, whose portrait we give in our illustrations, was the first gold commissioner in Victoria. He was appointed to Ballarat in August, 1851, filling a similar office upon various gold fields for nine years. He arrived with his regiment, the 51st K.O.L.I., in Sydney, in 1838. Mr. Doveton was a son of the Rev. John Frederick Doveton, of Endon Hall, County Northampton. Before leaving Eng land, when at Sandhurst, in 1834, he was one of ten students chosen to give an exhibition of horsemanship before King William IV, his Queen Adelaide and the then Princess Victoria. This accomplishment he retained, and when with his regiment in the early forties in Tasmania won many races. The gift of horsemanship may be said to have been inherited by more than one of his grandchildren, who are constantly seen on the polo ground and as amateurs in the saddle. The veteran colonist is 86 years of age next October. He has all senses perfect, and is living in Prahran. He frequently walks to Brighton to see his old friend and comrade Colonel Mair.[10]