Difference between revisions of "Elizabeth Abbott" 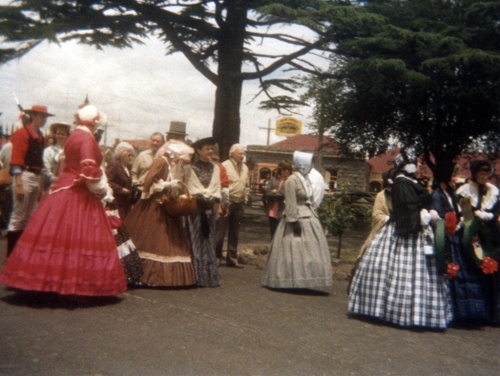 Elizabeth Abbott was born c1830 in England. She was reportedly disowned when she ran away with Charles Sea, a ship’s captain, whom she married on board ship. He died and was buried at sea, but Elizabeth migrated to Australia working as a governess to the Abbott children in the Geelong region. During her employment the brother of Mr. Abbott became ill with septicaemia and came to the station to be nursed. He proposed to her with only £15 to his name. Elizabeth married John Abbott and they proceeded to Ballarat in search of gold.[1][2]

According to family history Elizabeth lived in a small tent and was within the barricade during the battle of the Eureka Stockade. She hid behind a cabin trunk that became littered with holes. [3]

Her husband worked in a mine in the Scarsdale area, where they built a house and lived for the rest of their lives. Her children were: Harriet (1855 Ballarat); John Thomas (1857 Steiglitz); Alfred (1859 Brown’s Diggings); Isabella (1861 Smythesdale); James Emms (1863); James Emms (1865 Scarsdale); Elizabeth Emms (1867 Scarsdale); Arthur William (1869 Smythesdale); Louisa (1871 Smythesdale). She died on 26 September 1909, at the age of seventy-nine years, and is buried in the Smythesdale Cemetery. [4][5] She was buried two days after her death, and is interred in the same grave as her son, Arthur William and her daughter in law Caroline, nee Kemp, in the Church of England Section, Grave 1-652.

Elizabeth Abbott's husband, John, was admitted to the Ballarat hospital 15 August 1884, a miner, aged 55 years, who resided at Scarsdale. John Abbott died in 1889, inquest number 723. He was at Ararat, suffering from a brain disease and was a lunatic, according to the inquest papers. John Abbott was buried at the Ararat cemetery on 31 May 1889 aged 58 years. A patient at Ararat Lunatic Asylum, he was buried by his friends in the Church of England Section, Grave 1394. The owner of the grave was John Thomas Abbott.

Arthur William Abbott married Caroline Kemp. He died 25 December 1954 and is buried with his mother Elizabeth (1909) and his wife (1938) in the Church of England Section of the Smythesdale Cemetery. John Thomas Abbott, another son of Elizabeth, married Lucy James. He died in Stawell in 1929.

Isabella Abbott married William Law in 1885. Isabella had been admitted to Ballarat Hospital on 31 August 1878 aged 17 years. At that time she was living at Scarsdale.

Elizabeth, another daughter, was admitted to Ballarat Hospital on 14 August 1891 aged 24 years. She was described as a servant living at Scarsdale.

Louisa Abbott married William Stokoe in 1889. She died at Bendigo in 1953.

Harriet Abbott married Stephen Alfred Ward in 1876. She was buried in the Ballarat New Cemetery on 8 August 1944. Her husband is buried with her.

James Emms Abbott born 1863 at Black Hill, Scarsdale, was buried on 6 February 1865 in the Church of England Section Grave 9-164 at the Smythesdale Cemetery.