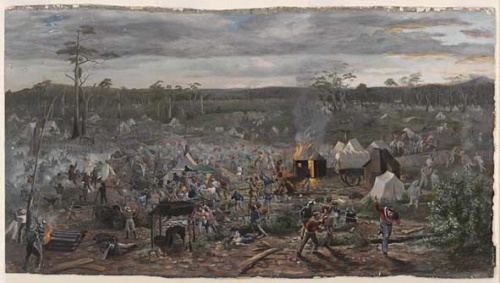 The 1850s Victorian goldfields population was one of the most cosmopolitan places in Australia and was comprised of many nationalities. All inhabitants lived under the British legal system, and many being foreigners or reformists were displeased with the laws governing them. Some had fled troubles in Continental Europe and elsewhere, and had witnessed the results of oppressive tyrants and governments. Some had been Chartists in England while others followed enlightened views in their homelands, and did not want to be repressed once again. [1] 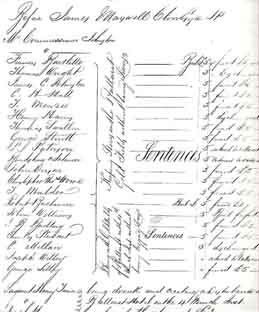 The NATURALISATION OF FOREIGNERS. A meeting of the Germans on Ballarat, was held last evening at the Old Kayser's Hotel, Main Road, for the purpose of petitioning Parliament to grant foreigners the same privilege after naturalisation, as possessed by British born subjects. Mr Charles Wiesenhavern being called to the chair, briefly opened the proceedings by stating the purpose of the meeting. Mr C. P. Fassert, alluding to a speech delivered in the Legislative Assembly by Dr. Evans, (on the second clause of the Electoral Amendment Bill), on the subject of naturalized foreigners being entitled to the same privileges as British subjects, and stated that there were 20,000 Germans in this colony, who, not only observed the same laws and restrictions as British subjects, but were very frequently called upon to act as jurymen at inquests and criminal sittings; they had taxes, duties, &c, and consequently ought to be entitled to the same priviliges. Mr Fassert moved, and Mr A. Pohl seconded— "That a petition be sent by all Germans to the Houses of Parliament, praying for those priviliges."—Carried. Mr Emil Pohl moved, and Mr Hoevermann seconded— "That a committee be formed for the purpose of framing the petitions and to act in favor of the movement."—Carried. Mr F. Courtain moved, and Mr C. Berghaff seconded "That the Committee should at once enter into correspondence with the German Residents in Melbourne, &c., and the gold fields, for the purpose of joining the movement."—Carried. Mr Adolph Pohl moved, and C. P. Fassert seconded "That all other European Nations and Americans be called upon to petition for the same oject."—Carried. The following committee was formed to carry out the movement, viz.:—Messrs. Emil Pohl, Max. Hoevermann, C. Ph. Fassert, and Charles Wiesenhavern. A vote of thanks to the Chairman concluded the proceedings of the evening.[3]

A Pathway of Remembrance for the 35 lives lost at the Battle of Eureka in 1854 was unveiled recently by the Irish Ambassador to Australia, Mr Tim Mawe. Mr Mawe said that the values of Eureka were long term in pursuing equality fairness and democracy and were equally relevant to his country. Costing $18 000, the Pathway of Remembrance was supported by diplomatic missions to Australia which provided plaques to honour their fallen citizens, including the British High Commission, High Commission of Canada, Embassy of the Federal Republic of Germany and Embassy of the Republic of Ireland. Additional plaques have been funded by the City of Goulburn and Mulwaree (Australia) and Eureka Australia, with project funding and delivery by the City of Ballarat.

Thirty-five eucalyptus trees are planted along the Pathway with plaques indicating the country of origin of the person who died.

The Pathway equally honours all the men and women who died at the Eureka Stockade, but whose names are not recorded. The path begins at the Eureka Circle where the story of Eureka is depicted across 20 individual panels, and then cuts across the lawn to reach the memorial to the Pikeman’s dog, an Irish terrier, who stayed with his master when he was shot at Eureka.[4]

Samuel Lazarus a young Jewish schoolmaster from Liverpool made his way to the Ballarat goldfields. He gave a vivid account of the lead up to Eureka in his diary. He describes a 'cruel butchery ... cold-blooded murder ... unpardonable recklessness' when writing about the Eureka Affair.[5] Charles Dyte and Henry Harris both freemasons and both Jewish were members of the Ballarat Reform League and drafted resolutions at the Monster Meetings on Bakery Hill in November 1854. Edward Thonen a lemonade seller was the only Jewish person killed on the 3 December 1854.

An incident on the Ballarat goldfields on 21 September 1851 illustrates the intention of the government forces and their preparedness to intervene in case of disorder. Commissioner Doveton and his assistant David Armstrong explained to the diggers the government’s decision to introduce licensing fees, which attracted an angry response from the miners. A public meeting was held immediately, and when the first men came forward to pay the fee, 13 they were struck and pelted by ‘the mob’ as Dana called them. Had it not been for the presence of the Native Police, Dana reported, those diggers would have been seriously injured (Fels 1988, p. 213)’. [6] 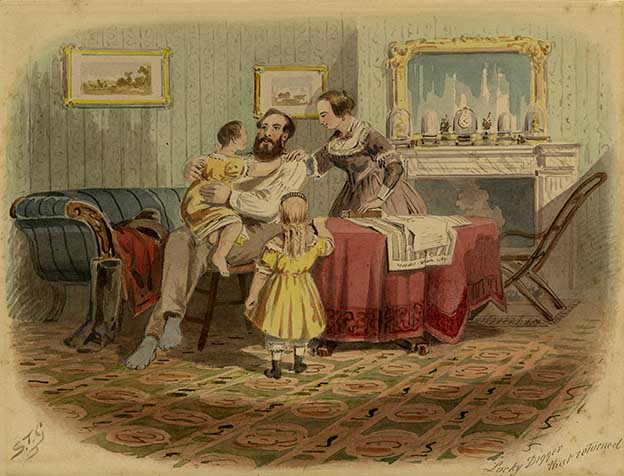