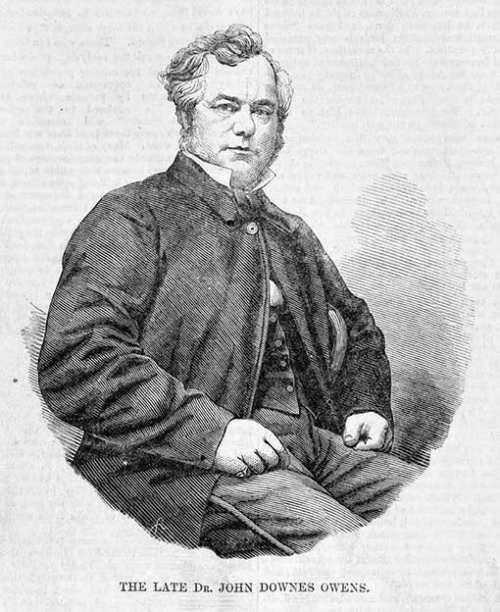 John Downes Owens was born in 1809 at Shropshire, England, son of John Owens, surgeon and his wife Martha Downes. He was a medical practitioner and goldfields leader. He studied medicine and claimed membership in the Royal College of Surgeons in 1839 and a doctorate of medicine in 1840. In 1850 He sailed to Australia in 1850 as surgeon in an immigrant ship for Sydney and Adelaide and after a short stay went to South America and then to California where he visited the goldfields. He returned to Sydney in the Queen of Sheba on 1 January 1852 and went to Melbourne followed by Bendigo where as one of the first doctors he had a lucrative practice. In 1853 he practised in the Ovens District for a few months and, indignant over the shooting of a miner by a policeman, began to involve himself in miners' issues. The miners rallied round him and elected him their representative at the inquiry but it was never held.[1]

At Melbourne in 1853 Owens presided at a meeting of the Colonial Reform Association on the land question and joined the deputation to La Trobe asking that squatters be given no privileges detrimental to the interests of the community. In Bendigo, where he again took up practice, he was a leader in the agitation for a reduction in the miners' licence fee, arguing that it be completely abolished. He was a spokesman for the miners in an interview with La Trobe from which he returned to Bendigo with government messages of conciliation. In January 1854 when the Bendigo miners were seeking representation in the legislature Owens and James Egan Wall were their delegates to the Legislative Council, where they asked to be heard on the new constitution bill.[2]

In May Owens moved to Brighton where he bought land but a depression in values soon caused him financial loss and he went to Mount Blackwood where he had a successful practice. He contributed to the Age until December when he announced his plan to publish his own weekly journal. In December 1855 Charles Hotham was at last persuaded to nominate him to the Legislative Council to represent the diggers. In March 1856 he retired from the council and patented a gold-washing machine which was found too uneconomical to run.[4]

Owens was elected to the Legislative Assembly for the Loddon District from November 1856 to August 1859 and in August 1861 won a seat for Mandurang, holding it until he resigned in 1863, 'too consistent and high minded' to succeed in politics. He served on eight select committees, including that in 1858 on the Lunatic Asylum at Yarra Bend in which he was greatly interested. In that year during debates on the medical practitioners bill he asked many questions and moved that unqualified medical practitioners who had been practising since 1849 should be allowed to continue to do so. He was appointed acting health officer at Queenscliff in 1864, briefly resident surgeon at Pentridge gaol in 1865 and next year secretary of the royal commission on the Wine and Spirits Statute.[5]

Dr Owens died at Windsor on 26 November 1866 and was buried in St Kilda Cemetery. His cousins E. and W. Anderson were chief mourners.[6]

DEATH OF DR OWENS. We regret to have to announce the very sudden death of Dr. J. D. Owens, so long connected with the public affairs of the colony. The deceased gentleman has recently been employed as secretary to the Wine and Beer Commission, and spent the afternoon of the 27th in assisting Mr. Johnson, analytical chemist, in certain experiments undertaken in coinection with his official duties. Returning to his residence in Windsor, Prahran, in the evening, he partook of food, his housekeeper observing nothing unusual in his appearance. About ten o'clock, after she had retired for the night, she heard her master call her, and on going to him she found him insensible. She immediately went for Mrr. Johnson, but on returning with him it was found that Dr. Owens had died in the short interval. Medical aid being procured, there was found to be reason to suppose that epilepsy had been the cause of this very sudden death. No doubt the cause will be fully disclosed before the coroner. Before entering upon his recent duties, Dr. Owens spent two years at Queenscliffe, in the public service, as the locum tenent of Dr. Robertson, health officer there. Previously he had been a member of the Legislative Assembly for several years. Elected to represent the Bendigo gold-field before the Constitution Act came into force, he was frequently re-elected, until he closed his Parliamentary career by resigning his seat about the time the present Ministry came into office. He was a somewhat active member of the strongly democratic section in the Assembly, and took for some time a prominent part in the debates on certain subjects. Mr. Owens is also understood to have written for the press at intervals. His sudden death will be a painful surprise to many public and personal friends.-Argus. The Geelong Register states that as so very much hss been said and so many fears raised with reference to the crops sufferingjust now with rust 'we have been at some pains to ascertain the exact state of matters. From our inquires we have been at some pains to ascertain the exact state of matters. From our inquires we have come to the conclusion that their is only the very slightest ground yet for any uneasiness. We can speak with reference to the Barrabools, Mount Moriac, Moodewarre, Connewarre, "Winchelsea, Birregurra, Colac, and Ondit, which certainly com prises a very large proportion of our farming district, and within these there is no rust worth mentioning. Indeed, it has not shown itself at all in most of the places named. --Love You' E.sExiES.-The visiting minister of one of the numerous Sunday Schools which are established at the White Hills, in the course of his inculcation of religious precepts, told his hearers that they should " love their enemies." Shortly afterwards the teacher was exhorting the scholars on the evils ofdrink, which he described as an enemy, I when one of the shrewd Australians immediately replied, " Why Mr -- just told us to love our enemies."-Bendigo Advertiser. [7] [8]

In 1853 John Owens spoke to the diggers at Beechworth:

Do you know what the word representation means? Of course you do! It means that of those who by wealth, or station, or authority, are placed over you, do wrong, you have the power of compelling them to do right. At present you have no such power ... This should not be. [9]

JUSTICE TO ALL.
(To the Editor of the Bendigo Advertiser.)
Sir,—I have read in your issue of this morning, a very interesting and well written article on the old pioneers of Bendigo and their doings, from the pen of our venerable and much respected old friend Mr. J. N. Macartney. As he has written from the date of 1854 I write as a 53 man to set him right in one mistake he has made. He places our worthy Minister of Mines at the top of the tree, which he has no right to occupy. Mr Burrowes was not known to fame until 1860, when he stood for the borough council and was elected. The men who first stood by the mining community, and gained their right, were Captain Harrison (1852), Captain Brown, Dr. Jones, George Edward Thomson, Mr. Ferris or Fervars, J.E. Wall, Mr Dixon, Captain Baker, Robert Benson, Dr Owens, Wm. Hopkins, E. N. Emmett, W. D. C. Denovan, James Dumphy, and others, all 1853 men. The big anti-license meeting was held in August of that year on the present site of All Saints' Church, attended by some 20,000 people. In the same year Mr. Angus Mackay (now the Hon. A. Mackay), E. Harrison, and R. R. Haverfield represented the press at the meetings of the period, and did good service both to the miners and the government.—
Yours, etc.,
OLD BENDIGO.
19th November, 1881.[10]