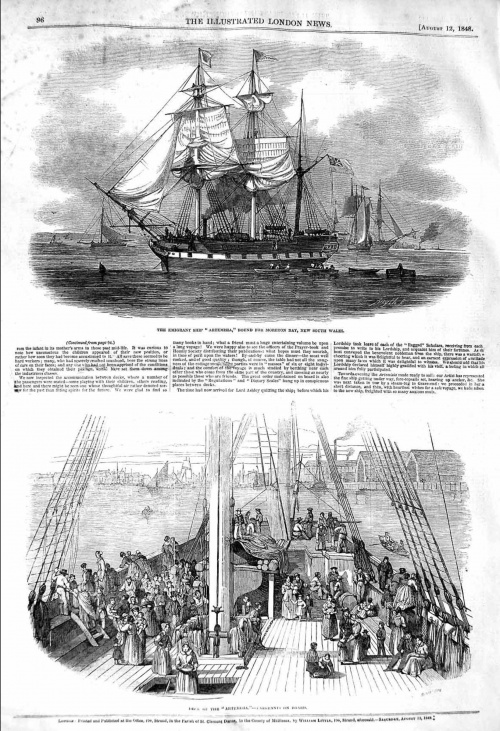 Her name is variously written as Aberdon, Aberden, Aberdine, Aberdein and Aberdeen. Aberdeen and Aberdein appear to be the most common.

Her parents had been married many years before her birth. Marriage Banns were read on 29 April and 6 & 13 May 1798. They were subsequently married on 27 January 1799. Both parents William & Sarah Aberdein had died before she emigrated.[2]

The 1841 Census for Ether Aberdine [sic] places her at 3 York Terrace, Lower Gamble, West Hackney. At this time her occupation was given as “? School”.[3]

Esther Ursula Aberdein, a nurse was 30 years of age in 1848 when she emigrated to Moreton Bay.[4]

Not much is yet known about Ursula's life in Queensland after her arrival in 1848.

Her name is variously written as Aberdon, Aberden, Aberdine, Aberdein and Aberdeen. Aberdeen and Aberdein appear to be the most common. His name John is interchanged with Francis and Larkom interchangeable with Larcombe and Larkham.

At 25 years of age John Larkom #3727 was a “lifer” sentenced at Northgate, Gloucestershire for housebreaking. Convicted on 1 April 1829, he was sent to the hulk Justitia on 12 May 1829. He was transported on the Prince Regent to VDL in August 1829. He arrived in Tasmania in 1830.

In poor circumstances John Larkom [sic] was noted on the Return of Paupers discharged from the Invalid Depots in Tasmania on 3 December 1875. He was admitted on 16 September 1875 and discharged on 30 November as “To service. Able to work”. As he was born in 1804 he was then 71 years of age and had lived a hard life as a convict.

John died soon after his release in 1875 at Longford, Tasmania.