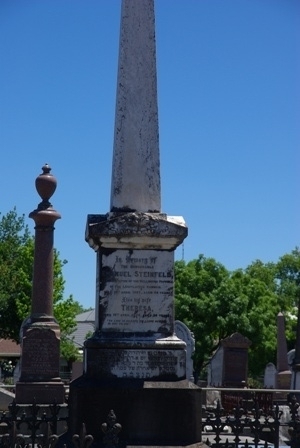 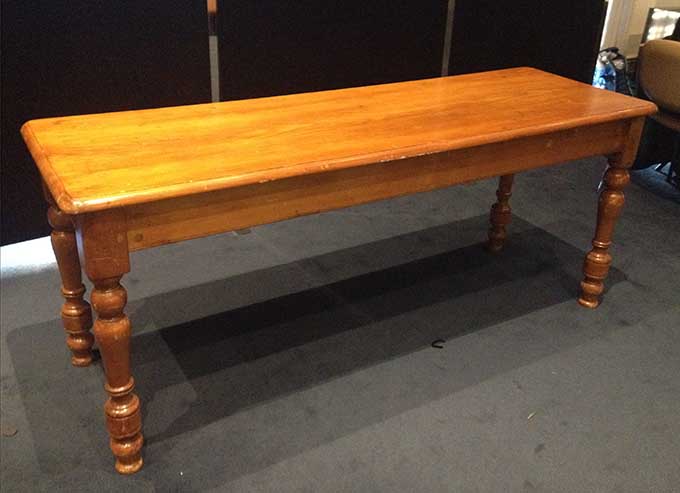 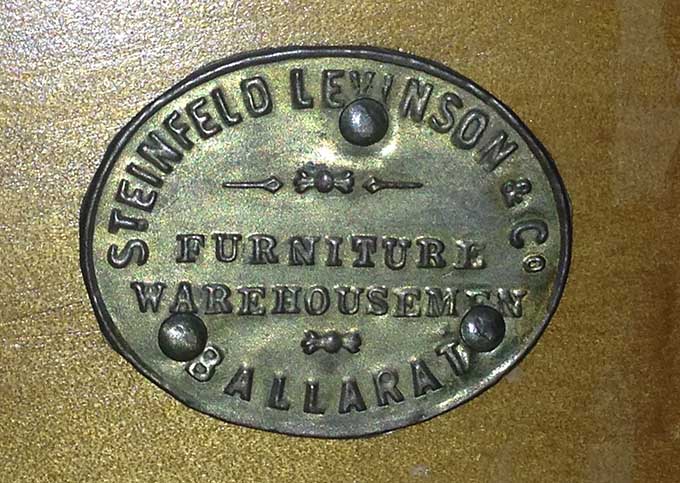 Steinfeld died 16 April 1893, aged 64 years. He is buried in the Ballaarat Old Cemetery.

A move to St Kilda in 1870 saw Steinfeld open a furniture business with his brother in law Hyman Levinson. [3]

THE LATE HON. E. STEINFELD.
A PIONEER MERCHANT.
Mr, Steinfold, M.L.C., who died in Adelaide recently, was a member of the Victorian Legislative Council and an ex-president of the Chamber of Manufactures. He was a native of the province of Silesia, Germany, and was 64 years of age. He went to London about 45 years ago, and there entered the employ of the firm of Krone Bros., merchants. When the gold rush to Australia broke out the firm decided to open a branch in Melbourne, and Mr. Steinfold came out as junior partner in the firm to take charge of the business. They opened a large establishment in Melbourne and subsequently an important branch in Ballarat, and in connection with the latter built two of the earliest hotels there, viz., tho Victoria and the Free Trade, and it may be interesting to state that the Eureka Stockade, which played an important part in the miners' riot, was close to the latter building. Mr. Steinfeld continued to conduct the Ballarat business for some considerable time, until the firm was dissolved - in consequence of the death of one of its members at home. He then started business on his own account at Ballarat. In the year 1859 he first exhibited an interest in public affairs by be coming a candidate for a seat in the municipal council, and being elected continued to hold the position for 15 years, during which time he was elected Mayor of the borough for three consecutive years, an honor which has not been conferred upon any other person up to the present time. He took a great interest in everything pertaining to the welfare of the town and district, more especially the important question of water supply, and he was the founder of the Gong Gong scheme of reservoirs, which to the present day gives Ballarat one of the best water supplies in the colonies. It was during his term of office as Mayor that Prince Alfred, now the Duke of Edinburgh, came to the colonies, and Mr. Steinfeld entertained him during his visit to Ballarat, He also took an active part in the management of charitable institutions, and was the founder of the Ballarat District Orphan Asylum, which is now one of the largest and most important institutions of the kind in tho colonies. He was appointed, a magistrate during his mayoralty, and also held high distinction in the Masonic craft, his rank being P.D.G. warden. In 1874 he opened another furniture establishment in Elizabeth-street, Melbourne, which proved so successful that two years later he erected very extensive buildings in the same street, and joined in partnership with his brother-in-law (Mr. H. Levinson), the firm becoming Steinfeld, Levinson and Co. This business grew apace with the advance of Melbourne, and soon occupied a premier position in that line until 1887, when the land boom being at its height tho firm decided to dispose of its valuable premises, and the business of the firm was wound up. Mr. Steinfeld than devoted his attention to matters of public concern and politics, and he took a most active part in the affairs of the Melbourne Chamber of Manufactures, of which he has been president. He was an-earnest advocate of the principles of colonial federation and, intercolonial free-trade. Through his instrumentality intercolonial conferences of the Chambers of Manufactures were held at Melbourne, Adelaide and Sydney respectively, at each of which he had the honor of being elected president. His ideas of federation have since to a considerable extant been adopted by Sir Henry Parkes, and it was in the furtherance of the objects of federation that Mr. Steinfeld, being accredited by the Melbourne Chamber of Manufactures, paid Adelaide a visit, when the misfortune befell him. Altogether, Mr. Steinfeld paid four visits to America, Great Britain and the Continent of Europe on business connected with his establishment, and he did not forget to take stock of any matter which struck him as likely to be useful to tho colonies in any phapo or form. On his last visit he was specially accredited by the Victorian Minister of Education to inquire into the systems of technical education which prevailed in the various parts of the world that he was visiting, and on this subject ho reported on his return. Mr. Steinfeld was also appointed chairman of a royal commission on technical education, which had been created by the then Victorian Government. A vacancy having occurred in the Legislative Council for the Wellington province, which includes Ballarat, by effluxion of time, Mr. Steinfeld stood in opposition to the retiring member, who sought re-election, and was successful in defeating his opponent by a substantial majority in September, 1892. Mr. Steinfeld was a widower and has left no family.[4]