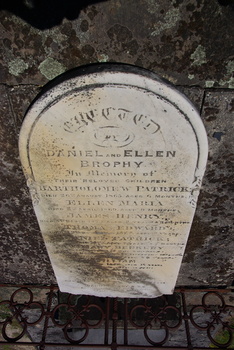 Daniel Brophy was born on 13 November 1832 at Castlecomer, County Kilkenny, Ireland. He was the youngest son of William Brophy, farmer, and his wife Margaret Purcell. In the Irish rebellion of 1798 the family estates had been confiscated. William Brophy escaped to Newfoundland returning after fourteen years and regained some of his property.[1]

Daniel Brophy was educated in local schools including a Quakers school. At 15 Daniel Brophy went with his family to Quebec in a migrant ship whose passengers were decimated by fever. His mother died on the voyage and his father soon after landing. Daniel found work in a shipyard but did not like it and entered a grocery warehouse.[2]

Brophy arrived at Melbourne in 1853 in search of gold. With four Irish friends he set off for Bendigo on foot. Water was scarce on the track and they worked at a quarry near Keilor until the winter rains began. The party was credited with the first discovery of payable gold at Taradale, but by 1855 they had moved to Ballarat. There Daniel Brophy proved himself a shrewd investor in many successful mining ventures. He started as the first sluice man in the Great Extended Mine and later became a director and chairman when it was renamed the Band of Hope and Albion; its total yield was about £3,000,000. Brophy also invested in a Ballarat hotel which he greatly enlarged and in landed property. An enthusiastic promoter of local industries, he became a director of the Phoenix Foundry Co. and of the Ballarat Woollen Mills. [3]

Brophy was an Irish Nationalist who first dug for gold at Bendigo and Taradale. He was a Knight of the Order of St George, mining manager, mining Investor and hotelkeeper. [4]

In 1859 he had married Ellen Mary Berkery; he was survived by five of their ten children.

Brophy signed a Petition of householders of Ballaarat requesting the establishment of a Municipality in 1855. He was a shareholder in Ballarat’s Band of Hope Mine in 1866, and ran the British Hotel. Brophy was living at Ballarat in the 1880s. He was a member of the Ballarat Old Colonists' Association, and a member of the Legislative assembly between 1877 and 1883, and Mayor of Ballaarat in 1875-1876.

Daniel Brophy is buried in the Ballaarat Old Cemetery.