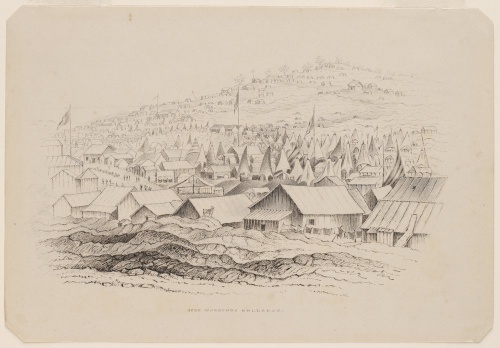 • From March 1854 leases of land could be sold at auction to the highest bidder, the sizes of claims were defined for parties of from 1 to 4 miners with the commissioner having the power to amalgamate claims on worked or flooded ground.

• The Ballarat Local Court regulations of October 1855 defined a claim for 8 men as 34 feet by 34 feet and the extent of a quartz lease as 12 feet by 12 feet per man employed.

• Between March and June 1856 a series of regulations gave effect to the Frontage System' on the Frenchman's, White Flat, Black and Gravel Pits leads, and the registration of both Frontage and Block claims and defined the extent of the claims based on the depth of sinking and the difficulties to be overcome.[1]