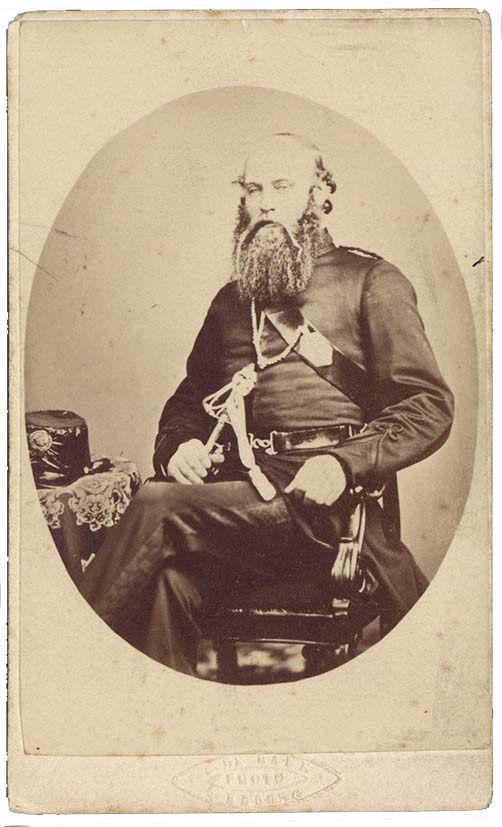 Captain William A. Pulteney Dana was head of Native Police Corps.[1] He arrived at Golden Point on 19 September 1851.

The "Argus" reported on the rich auriferous land at Ballarat: "BALLARAT DIGGINGS ........ The yield is immense, seemingly inexhaustible the gold lies in 'pockets' in the blue slatey clay, and may be picked out with a knife point, so rich indeed is it, that many have abandoned cradle workings for tin dishes which have yielded from 2 - 3 ozs. in one washing. Many will make FORTUNES. - This party applied for an escort and were told by Captain Dana that he would see them damned before he would give an escort to such a lot of fellows! The gallant Captain was told that the escort was applied for by virtue of the licences which paid for Government protection - not that they required it: as they were capable of protecting themselves. I saw the party afterwards cleaning their pistols preparative to a start. They declared to me, that from the malmanagement of the Government, the insults they had been subjected to, and the inconvenience forced upon them, they were doubtful of returning and deemed it preferable to abandon the present rich field and explore elsewhere than remain in Ballarat. The escort was ultimately granted. I would remark 'en passant' that the redoubtable Captain Dana diversified his exploits on Saturday, by knocking down a young man named Thomas with the 'butt' of his whip. The young man fell into a pit from the effect of the blow. It is gratifying to record such a gallant military exploit - a repetition of the like of which will render it a matter of necessity to place him under surveillance of his own Satanic Battalion of Black Guards - a suitable troop for such a commander."