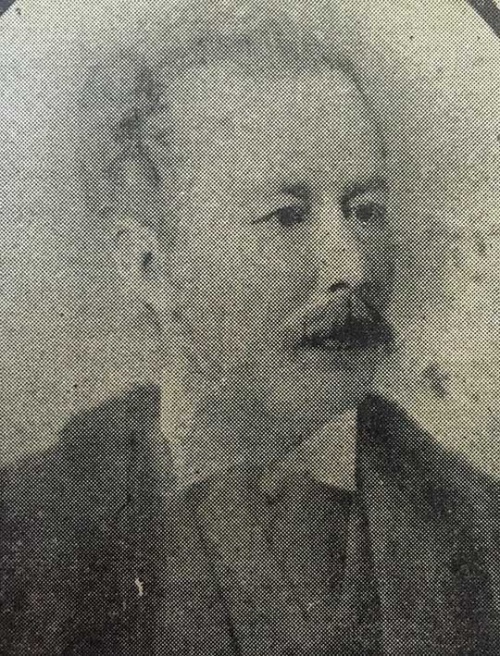 Alexander Morrison, the first secretary of the movement for a monument at Eureka. Ballarat Heritage Services Picture Collection

Alexander Thomas Morrison was born at Bow Churchyard, London, England on 13 January 1840. He sailed to Geelong on the Woolbridge.[1]

Alexander T. Morrison served as a Councillor and Mayor. He was first secretary of the movement for a monument at Eureka.

A meeting of Citizens was held at the Royal Hotel, Ballarat, on Wednesday, April 16th, for the purpose of taking steps to secure the erection of a suitable MEMORIAL to make the site of the conflict that took place on Sunday Morning, December 3rd, 1854, between the Diggers of Ballarat, and the Government Forces. The Committee confidently appeal not only to the Pioneer Diggers of Ballarat, but to the native youth of Victoria to assist them to carry out this long deferred, but much desired work. The blood spill at the Eureka Stockade served to stimulate and advance the cause of civil and political liberty throughout Australia, and to that sacrifice the free and enlightened constitution now enjoyed is, to a great measure, virtually due. To indelible perpetuate the memory of this fact in a proper manner, so that future generations may not forget what they owe to the past, is the object that the Committee have in view; they solicit your cordial sympathy and support, and trust that the thirtieth anniversary of the Stockade in December next, will witness the unveiling of a Memorial that will not only be a credit to Ballarat, but a fitting tribute to the heroic self-abnegation and valour of those who fell at its base.
I have the honor to be,:Your most obedient servant,
A.T. MORRISON,
Hon. Secretary.

DEATH OF A PIONEER,
Mr. A. T. Morrison, accountant and treasurer, died at his residence, Webster street, this afternoon from general break up of the system. The deceased was born at Bow Churchyard, London, 13th January, 1840, and was, therefore, 63 years of age. In April, 1850, he sailed with his father in the Woodbridge, and landed in Geelong after a voyage of 120 days. The father of the deceased, Mr. "William Morrison, through, the instrumentality of a distant relative, the Hon. Dr. Thompson, who represented Port Phillip in the New South Wales Parliament before Victoria became a Crown colony, and who owned the Kardinia Park estate, started and edited the Port Phillip "Patriot" at Geelong, said to be the first daily paper published in Victoria. When the gold fever broke out in 1851 the deceased and his father came on to Ballarat, together with the late Mr. James Curtis and Mr. Wm. Horman, who had been employed on the same paper. Deceased took a keen interest in public affairs and was twice mayor of the city. He was twice married, and leaves a widow and two sons.[2]