Agitation Hill: Where is it? 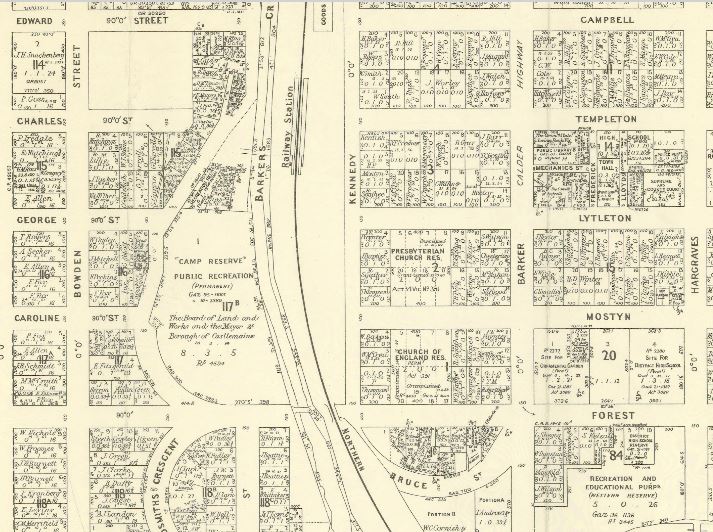 Agitation Hill, Castlemaine - Where is it? by George Milford

Agitation Hill is, or was, situate at the west of the central business district of Castlemaine, on the higher western portion of the township blocks bounded by Barker, Templeton, Kennedy and Forest Streets. The sandstone Christ Church Anglican Church claims to occupy Agitation Hill today, as it has done since 1858, although the foundation stone was set in place in February 1854.

During the gold-rush years the hill was of greater extent than just the Anglican portion. The hill was steep enough to be used by horse dealers conducting sales down on the flat (near Victory Park) to demonstrate that the beast about to be sold could pull a loaded dray up the steep hill, and therefore justify the highest possible price! With the agreement of the town council, the railway contractors Cornish and Bruce, seeking material to build the railway embankments, excavated a deep cutting in about 1861 to form the Mostyn Street that we see today, leaving the Presbyterian Church (to the north) and the Anglican Church (to the south) perched high above the new roadway.

The western end of Lyttleton Street was given the same treatment, providing a similarly exalted situation for the Independent (Congregational) Church.

A placard calling miners to attend a meeting on 9th May 1853 invited them to meet “upon the hill behind the Baptist Chapel”. I have not located the site of the original Baptist Chapel – it must have been a temporary affair. It was not until 1861 that the Baptists acquired the Former Free Presbyterian Church building in Templeton Street. We must not conflate the historical account and the present location of the landmarks. In view of the involvement of William Hitchcock in the meeting, it would be reasonable to assume that the meeting was held in Lyttleton Street, in proximity to the Independent chapel, as Hitchcock was the leading Independent in the town. Eurekapedia supports this view.

The entire ridge was high enough to overlook the hated government camp. W.H. Wilson, speaking to the Pioneers and Old Residents Association on 26 September 1890 told of mining at Sailor’s Gully in 1852/3. He said “At this time the discontent of the diggers began to take shape and meetings were held on the hill opposite Circular Road which they called ‘Agitation Hill’, but Captain Bull and the other commissioners called it Confusion Hill. It is now Church Hill” The most obvious choice for “Circular Road” is Bruce Street, which would place the meetings squarely on the hill now occupied by the Anglican Church, Rectory, car park and labyrinth.

This is confirmed by the account of Thomas Carte, speaking to Pioneers and Old Residents Association on 28 December 1883 who told how he had arrived at Forest Creek in March 1852. Tom’s point of view was that of a digger working along the banks of Forest Creek. He stated, “Diggers in those days had their grievances, and a preacher named Jackson took up their cause and called a meeting one day on the hill above Circular Road, at which Mr. Aberdeen was one of the speakers, After Mr. Jackson had been haranguing the men for some time and pointing out the futility of expecting anything yonder – nodding his head in the direction of the commissioners Camp - Mr. Aberdeen made a speech.”

A plaque on the brick wall of Mostyn Street states, ‘John Hepburn camped here April 12, 1838’ Closer reading of the historical account suggests that John Hepburn, with shepherds and convicts, was driving his great flock of sheep hard to get them to a spot suitable for their lambing. Mrs Elizabeth Hepburn, in a horse drawn cart, was bringing up the rear, and may have been up to five miles behind the main party.

Major Mitchell came here in 1836 and crossed Barkers Creek at about the west end of Berkeley Street. He found there much grass in a shallow valley. The nearby hills he described as ‘broken by sharp-edged strata, timbered chiefly with iron-bark and stringy-bark.’ This would be a good description of Agitation Hill at that time.

Agitation Hill was a convenient spot, near a waterhole at the junction of two creeks. John Hepburn set up camp for his wife, two children and an aged convict called George Cook. But the waterhole was not going to be sufficient for a big mob of sheep, so John Hepburn then pushed on till he reached the junction of the creek with the Loddon River at Guildford, where he set up a lambing camp under the Big Tree. In all, Mrs Elizabeth Hepburn, who was five months pregnant, stayed here for four days. John Hepburn was not here for much of the time, despite the words on the plaque.

In these more inclusive times, we must balance the ledger by looking a bit closer at the unsung heroine of the trek, the lady who first camped here, Elizabeth Hepburn. A biography of John Stuart Hepburn gives scant details of Hepburn’s wife. “There is nothing sufficiently precise in the family tradition to make a living portrait. She was one of hundreds of pioneer women who left no personal histories, women whose qualities must be guessed from what they endured.”

Strange to say, Mrs Lucille Quinlan, author of the Hepburn biography Here My Home, then goes on to scatter clues right through the book. These clues lead us to a fair portrait of this ‘lady of the manor’.

In writing of the pioneers, the author has fallen into a cultural trap. We tend to view our pioneers through a spyglass, a blinkered picture, taking them without taking account of the times and of the relationships. We view them in isolation and say, look at this man’s achievements! We forget the cultural underpinning, the environment, the influences, the help given by family and friends. It is my contention that the plaque suffers from a masculine bias. It should read “Elizabeth Hepburn camped here”

The Government Camp at Castlemaine

Victoria’s government was not at all democratic at the time of the gold-rush. The Governor was bound to behave in accordance with the Governors Instructions issued by the Colonial Office in London. This permitted no flexibility. The Colonial Office, just two generations removed from the loss of the American colonies, feared the spectre of republicanism m more than anything else. To yield to democratic, self-governing colonies would be to set a precedent among a wide range of Britain’s offshore possessions. And, no doubt, loss of colonies would be loss of colonial markets for British-made goods. Despatch after despatch from the Victorian Governor was responded to with advice coloured by those primal concerns, (1) fear of republicanism and (2) potential loss of markets.

Under these conditions the Legislative Council was unable to tender advice to the Governor. The Council itself was unrepresentative, comprised as it was of nominee wealthy squatters who regarded the gold miners as intruders on their lands. Self-preservation was the primal sentiment among the ruling cliques.

Goldfield pioneer of 1852, Henry Britton, speaking to the Pioneers and Old Residents Association on 17 June 1887 “It is worth remembering, with regard to Sir Charles Hotham, who became so unpopular in connection with the mismanagement of the goldfields, that it was not his fault that he, a naval officer, Charles Hotham was offered the governorship of Victoria he exclaimed “For God’s sake, give me the command of a frigate; I know nothing of any other business”.

How the diggers saw the Government

George Higinbotham summed up the situation; thus, - Victoria was beset with “Injudicious laws injudiciously administered’ Higinbotham was a lawyer employed on the editorial panel of “The Melbourne Morning Herald” a newspaper widely circulated on the goldfields and a newspaper not afraid to give a voice to the diggers.

Arthur Hodgson, speaking to the Pioneers and Old Residents Association on 30 September 1881 told of the ‘overbearing and intolerant conduct and neglect of some of the officials’, quoting freely from the “Commission Appointed to Inquire into the grievances of the diggers and others in the district”. These stories included the incident where Commissioner Rede reprimanded Henry Lake for not removing his hat as he passed the commissioner’s Tent. In Arthur Hodgson’s mind “this beats the legend of William Tell and the tyrant Gessler.” He also reported the scene at the camp where the humble suitors for liberty to dig waited their turn to pay their 30 shillings …some told me it was their third day of coming -their third day lost! when men were chained to logs for even trivial offences. He forebore to speak of ‘digger hunting, the seizure of grog, the burning of sly-grog shanties.

Of William Hitchcock, McKillop’s verdict was quoted by James Martin (P 38) “Mr. Hitchcock was undoubtedly the strongest personality in the early history of Castlemaine, and many who knew him affirm that no public man in the town wielded such a dominating influence or was so strong and able as Mr. Hitchcock. In politics he was a democrat of the best type. His influence over his fellow citizens in the dark days of commissioner rule was marvellous.

William Aberdeen A conspicuous man-about-town, Aberdeen ‘had skin in the game’ purchasing multiple town allotments at the first land sales, ultimately amassing 493 lots in and about Castlemaine. Aberdeen’s nearest rival for the title of land shark was William Hitchcock who purchased 249 lots in and around Castlemaine.

This was a reaction to a Police Raid in which men women and children were evicted and eating houses destroyed ‘on the information of a perjured scoundrel, instigated by unscrupulous authority’.

Public meeting against the license tax. And to present a petition.

For the reduction of the license fee and in support of the petition.

To collect signatures on the petition.

In reference to the Goldfields Enquiry

Castlemaine is proud of its history. The turbulent, near anarchic, beginnings encompassed a period of martial law. The regiments that were stationed here are remembered by the regimental flags laid up in Christ church. The community is governed by a municipal council, first inaugurated by a citizen’s meeting conducted from a dray in the Market Square. That the military forces were peaceably routed and driven away is due to the courageous men who first met to remonstrate against the heavy-handed administration of law in vast meetings held on Agitation Hill.